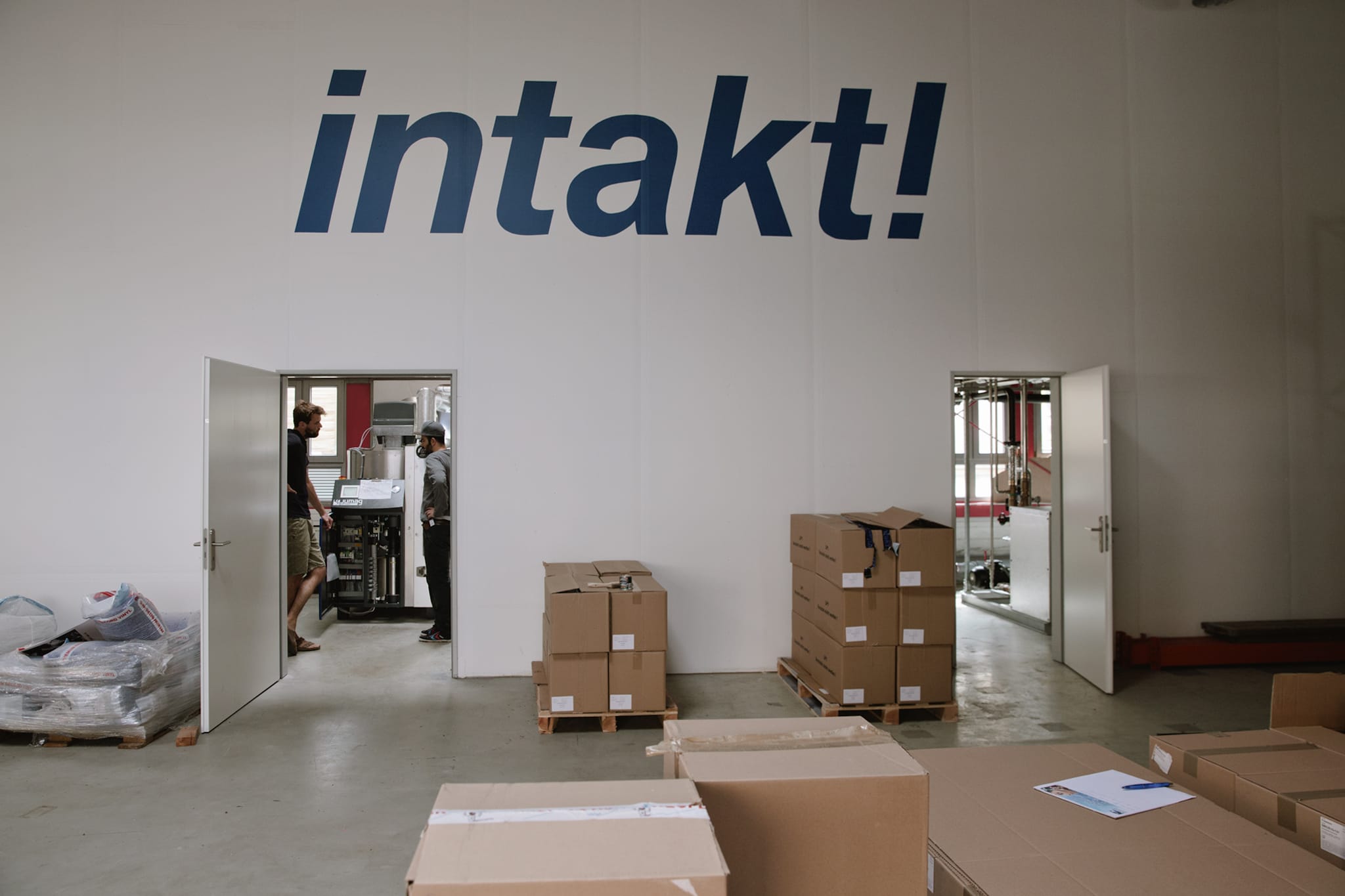 You won’t easily find Berlin’s first pressing plant in years, Intakt, if you can find it at all. Nestled deep and rather idyllically in the city’s Southernmost suburbs, it’s neighbours are not record stores, clubs or bustling label offices, but vast storage units, and more unusually, a large indoor volleyball centre. Unfortunately, Intakt’s founders, Max Gössler and Alexander Terboven, have little time to spare for beach sports. Aiming to press thirty thousands records per month with a four-week turnaround, the noble aim of Intakt, inspired by the pair’s background as formidable music consumers themselves, is to make pressing records to vinyl easier for small labels. What will hopefully be a smooth experience for customers is a huge undertaking for the pair, who between them, have an endless and growing list of tasks beyond simply maintaining the enormous presses themselves. On a breezy afternoon, and while Terboven continued to take care of both manual and formal business, Max Gössler filled The Analogue Foundations on the awkward realities, the supreme challenges and the ultimate satisfaction of fulfilling a very physical dream in an increasingly digital world. 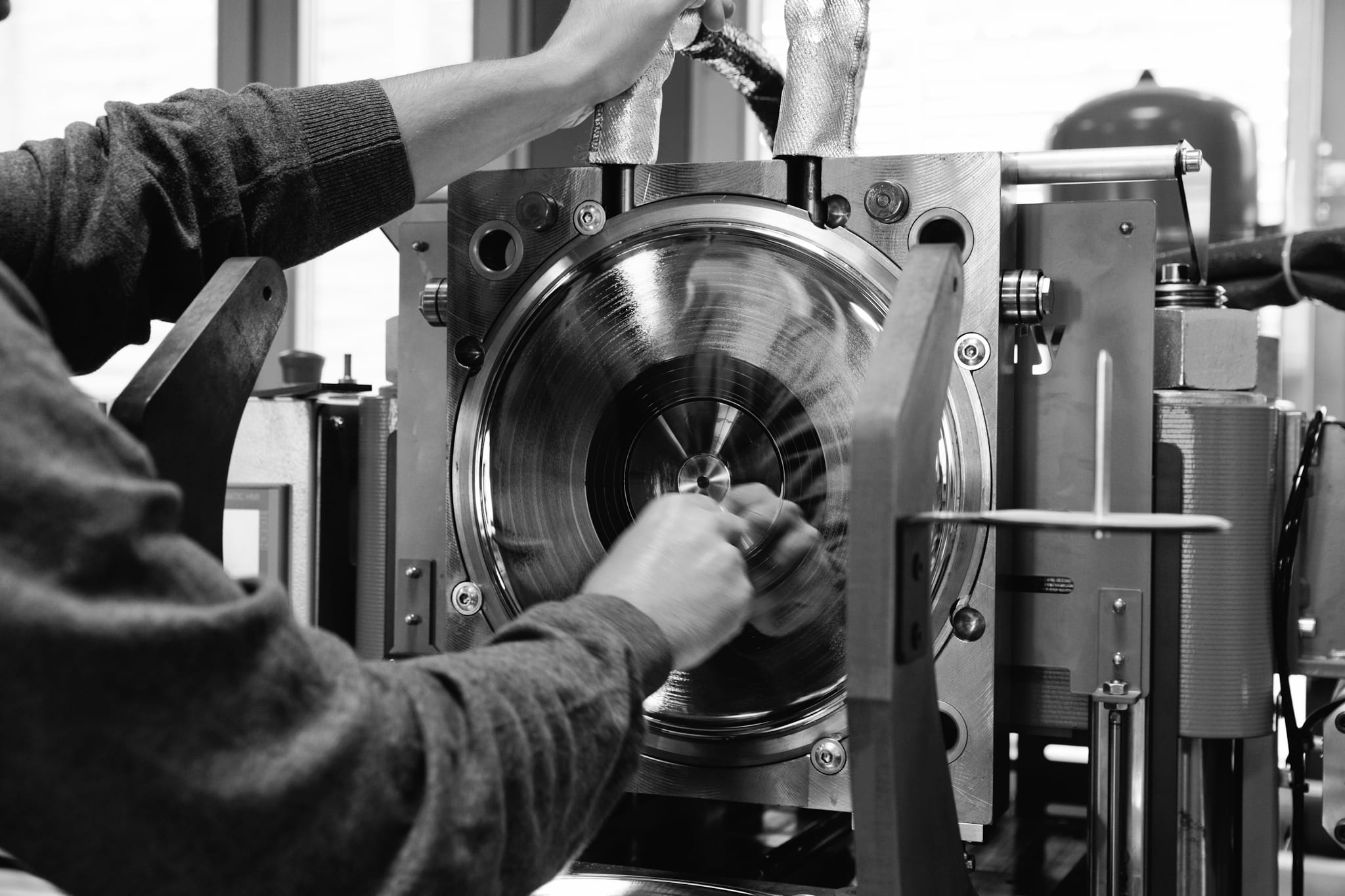 What does the term analogue mean to you?

Analogue for me, means that there is a continuous, decelerating form of having something in your hand. Well, put differently; analog has certain aspects that make something analog. Obviously it has to be something haptic, in a way, but it’s something different for the analog signal. But, the term, as people use it today means there’s a haptic side to it. When people come to my studio and see my Eurorack for example, and assume it’s analog, when half the gear might be digital. And a record has continuity, until you take the needle off.

How long have you lived in Berlin, and when did you begin this project?

I have lived here for nine years. We began the project at the end of 2015, and then we founded the company the following March. But then we had to get money.

What were the key motivations for starting Intakt?

We had the opportunity to get our presses, and that was motivation enough. We were thinking about that before, but we didn’t have the chance to get presses, and then we knew it could be a successful project. We began to realise how difficult it was becoming for independent labels to have their records pressed in time. And we as we knew the market a bit, we knew the problems of getting records made at big pressing plants. Either having to wait four months, or getting pushed out from the capacities.

Given the renewed interest in physical music, were you surprised that more people haven’t invested their time and money in starting a new pressing plant?

Well, it’s a lot of money, as you just mentioned. First of all, you need to get almost half-a-million Euros, and we didn’t have that money in our pocket. We had to work for it. And that was the first big effort, to have the banks convinced.

Was this a difficult idea for financial organisations to understand? Did you need to show them a Discogs account?

No, it wasn’t the Discogs account, it was more the financial concept behind it, so the business plan and the strategy that’s the whole backbone of the project, really. They wanted to see a plan for the next eight years which proved convincing to them. I have an economics background, while Alexander has a technical background, so it was probably convincing to them that we had somebody to monitor the industrial system, and someone who understood the whole financial side, to be transparent and that everything was calculated. 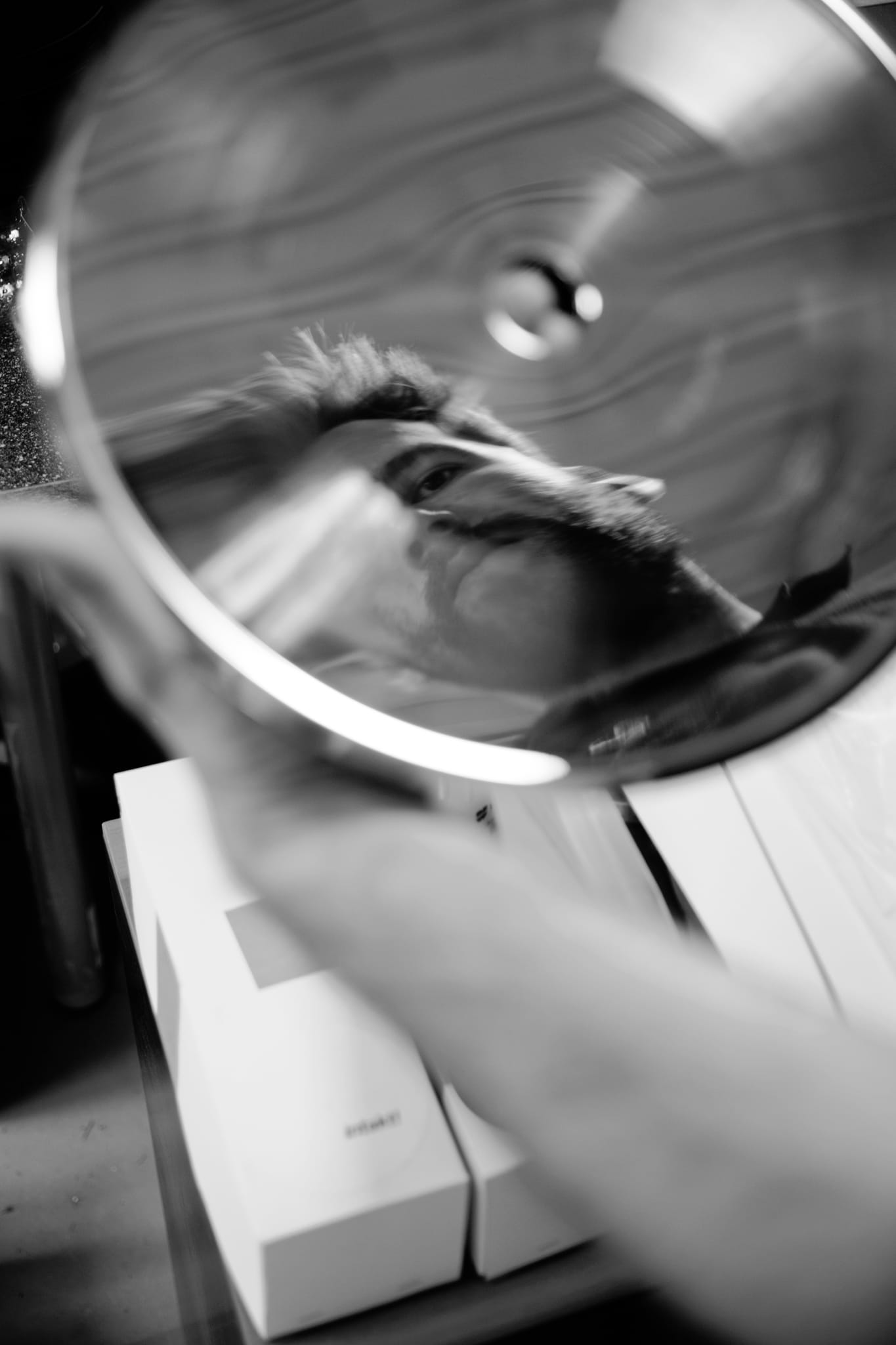 How quickly did you find this space?

That was the biggest problem, I would say. Everything with the banks went pretty well. We got the money within three or four months, whereas, some people will be looking for money for two or three years. We had this romantic dream of locating the pressing plant in the city, in Kreuzberg or Neukolln, but when we were visiting the sites it became quite clear that it wasn’t the place to have a pressing plant. Not only due to the cost of rent, but in order to support the whole infrastructure. For example, the electricity power we needed. Sometimes the machines run at night, and we have a cooling tower sitting outside, which you can’t just put on a third floor. Also, the machines weigh one-and-a-half tonnes on one square metre, so it needs to hold, then you’d need an elevator to carry that…

So this location came equipped with everything you needed to begin?

Yes, but it took us four months, and it was quite frustrating. There was just nothing there, until we found this, the perfect spot. We have a huge gate, that meant we could drive the equipment right inside. When we get new deliveries of PVC, we have space to work with that and we have room for the oil tanks. If we had moved in somewhere else, we would have had to invest around 100000E just for infrastructure. We have a chimney, and each metre of chimney costs 800 euros. And that’s the cheapest chimney we can get. Imagine building 25 metres of chimney in Krezuberg. We just have three metres out here. All those old industrial buildings you see there, they are just full of architects offices. We needed something all industrial.

I read a figure of 30000 records pressed a month? Are you on track?

That is our capacity, but we are only running at around 60% of that, as we’re not fully booked. But it’s still more than we’d planned. That’s not bad for us, as it’s a lot of work and we need to get used to the processes, as we haven’t ran a pressing plant before. We started taking orders in May, the first records were pressed in April, but we were testing for a month in order to calibrate the whole system. There are new procedures and routines to be developed, and we are switching things round. There are optimisations ongoing all the time, and that would be difficult to do at full operation.

I know you produce and DJ, so you know the scene. Have you made efforts to reach out to labels so far?

We wrote two or three press releases, and two or three local newspapers responded. But from that point onwards, it wasn’t us anymore. It went a little bit viral, and other newspapers, magazines and distributors were calling us to do the same story. We didn’t send it to Resident Advisor, but they did a story on us. We wanted to give them the story, but we didn’t need to!

Are you keen to let this build gradually, rather than succumb to hype?

Well, the hype is not bad, so long as you can control it. Right now, I actually don’t know if there’s any hype about us. We just need to focus. We get here at eight in the morning and leave at eleven at night. We have no social life left. You are the only social life we have right now! 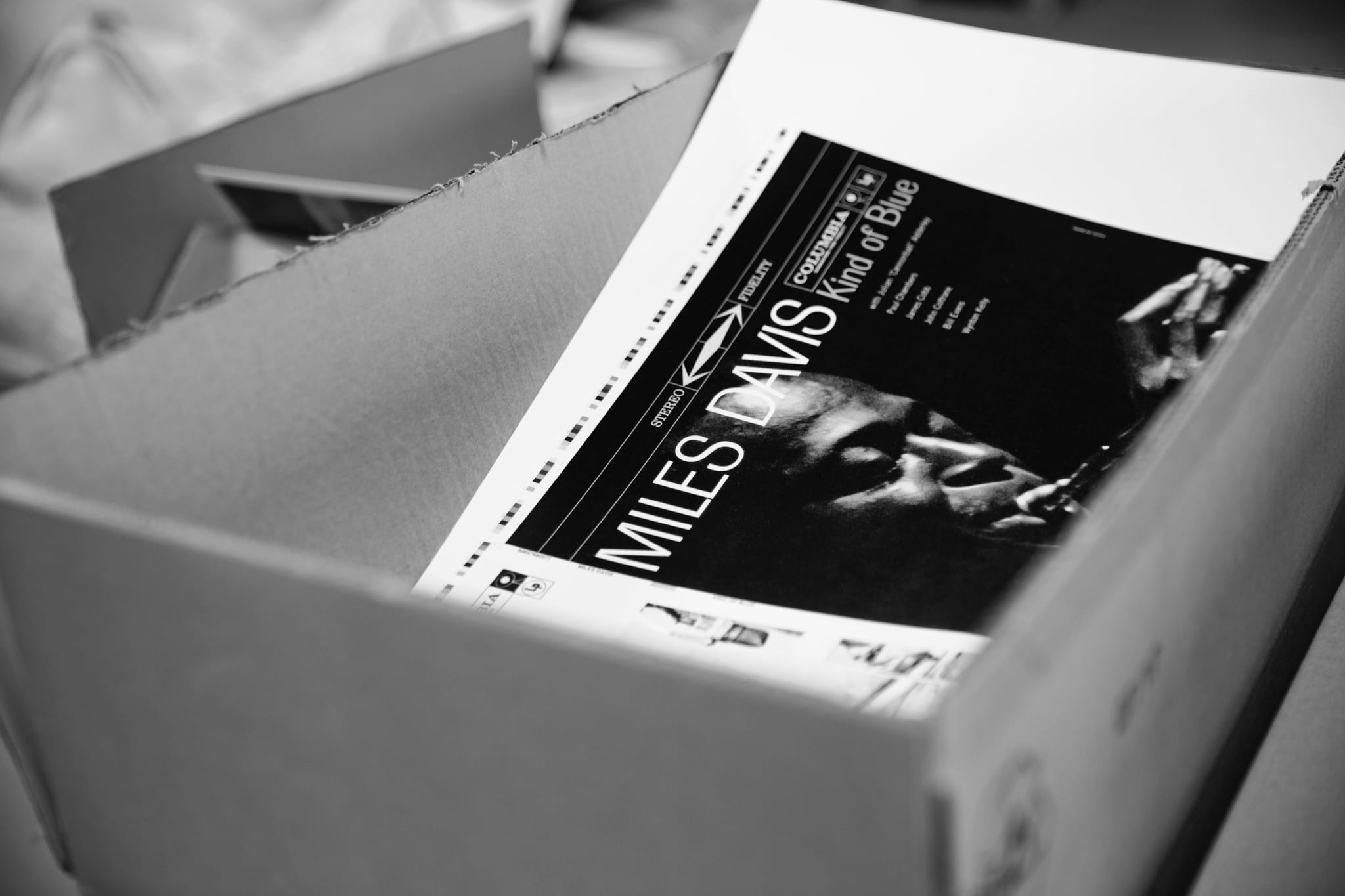 How did you and your partner in Intakt, Alex, first meet? What lead to this?

He is the best friend of my brother, and the Godfather of my niece. We have known each other since we were teenagers. I had the idea and the initial business plan for the pressing plant, and my brother asked me, “Do you really want to do this by yourself? Wouldn’t it be better if you have someone else?” Alex was unhappy in his job, which he had been in for ten years. He lives in Hamburg, where he still goes back to at the weekend, and we had played the same parties. So, I spoke to him and explained that the next bank appointment was the following day. I told him if he came, he had to be in, because if he dropped out and didn’t turn up a week later, it would look very dodgy. But he came in, and then he quit job the next day. And that is some dedication. Also, it looked very good to the banks to have two of us there, covering both the financial and business side. But that works in reality too; I’m much more into the figures and the logistics, the pricing, developing a network of partners for printing and stuff like that.

But you’re both record nerds?

Oh yes. We each have thousands of records.

From both the perspective of a collector, and now a manufacturer, why do you think vinyl has persisted as such a timeless format?

Well, first of all, there’s the quality control. It costs money and takes time to press a record to vinyl, so it’s a commitment. Then there’s also the record stores, deciding whether to sell it or not. Considering that you can get software now that uploads music directly to online stores, it’s a risk. But mainly, people just like to hold music in their hands, to really connect with it. 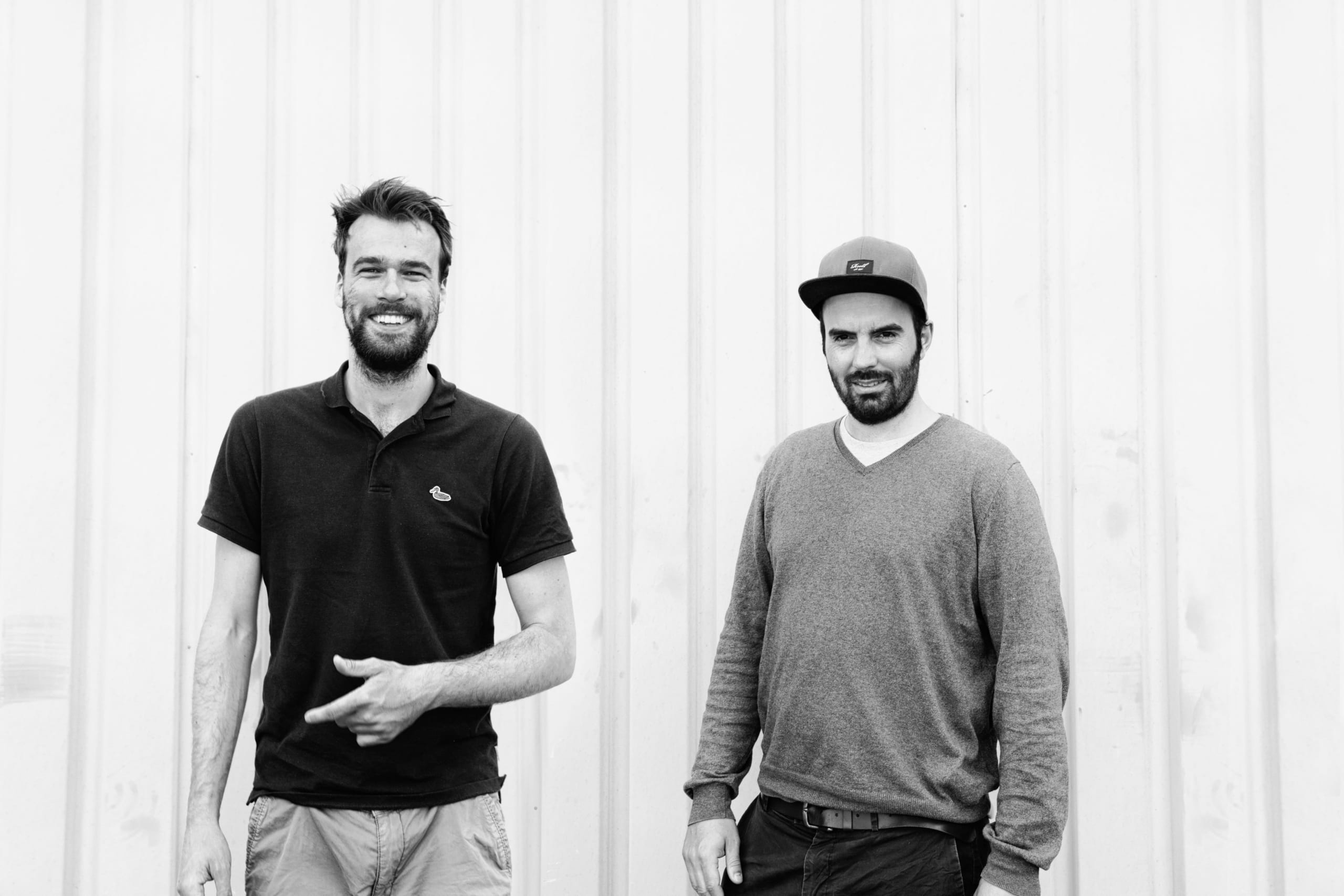 Vinyl pressing plant in Berlin started its operation in 2017 by two entrepreneurs Max Gössler and Alexander Terboven. From mastering to the print of covers and the pressing, they offer high quality one-stop service for the ready-for-sale record.