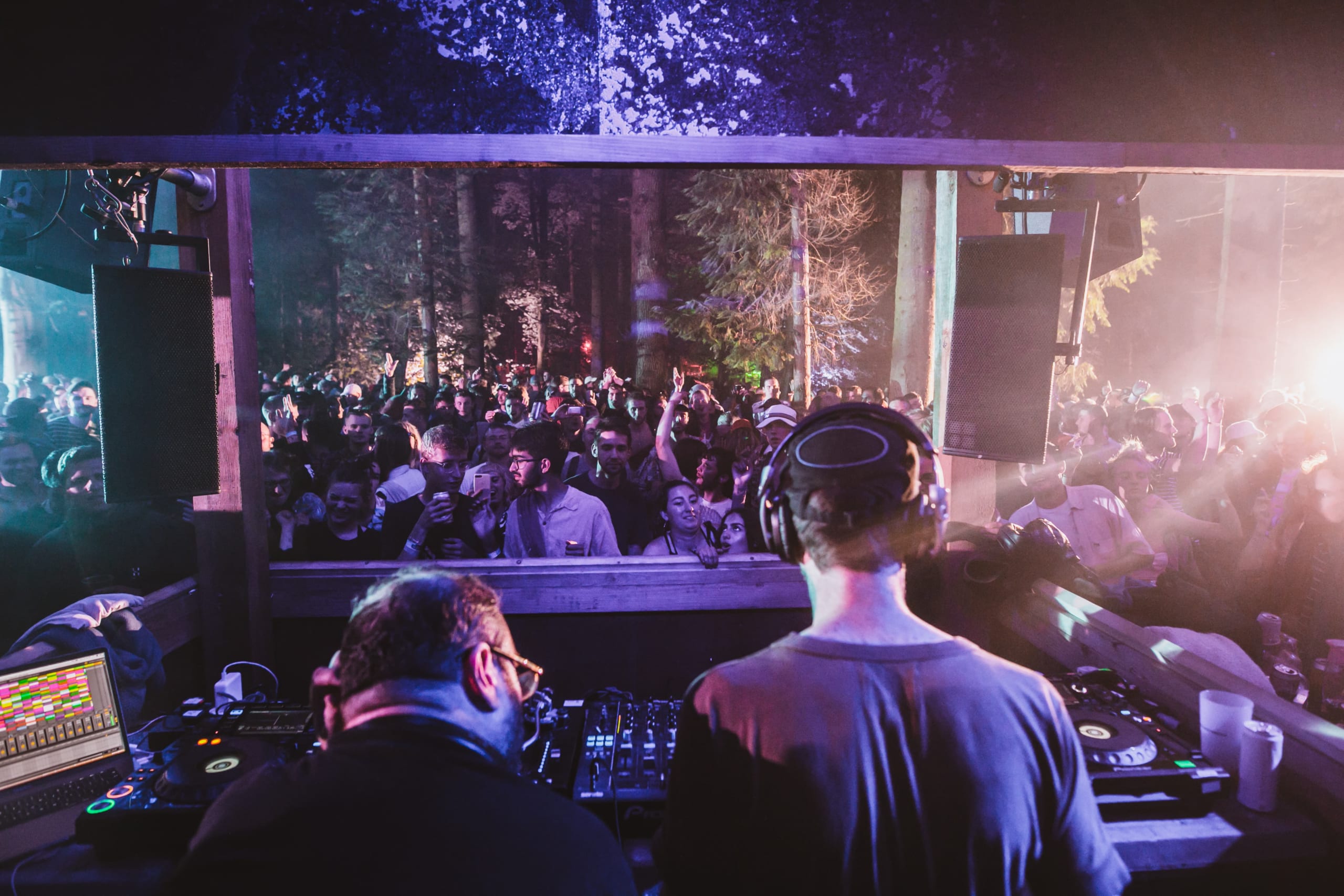 Optimo Espacio translates as “optimal space” in Spanish. It’s a fairly fitting name for two DJs who began their career as a duo trying to turn a dance floor into just that. Jonnie Wilkes and Keith McIvor, known independently as JG Wilkes and JD Twitch, established their now legendary weekly residency at Glasgow’s Sub Club in 1997, with a mind to creating a different sort club night. They wanted to build a space that welcomed diversity and improvisation; melding live performance with DJ sets, offering the promise of off-kilter selections and special guests. The night became the centre of the city’s nightlife, and although it ended in 2010 its ethos and name—now often shortened to just Optimo – show no signs of quieting.  The pair now have a demanding DJ schedule playing regularly around the world, Twitch runs the Optimo Music label and they work as producers and remixers. As DJs they proudly resist genre-definition, instead treating their sets as freewheeling dives into their record bags, however oddball and unexpected things might get. They are proponents of a certain type of a clubbing: selectors who treat the club as a changeable thing. We spoke to Jonnie, to get his take on the Optimo story, and to find out what makes a space the best it can be.

When I think about this, it’s difficult to stop myself defaulting to the customary analogue/digital comparison that seems to prevail. The tendency to contrast analogue with digital is so frequent it’s hard not to get drawn in, so I will try and think about it more esoterically. As with most things I prefer addressing how the physical, emotional and spiritual parts of me respond. I don’t get very fired up about graphs. So, my honest, first thought, if I think about the term “analogue”… I definitely imagine a representation that is proportionate to its source but is always varying. It’s quite ”picture-like”,  a route, a path with smooth gradations and undulations… this is loose I know! (Trying to get there!) “Analogue” says something vaguely holistic to me, something with numerous, intimately interconnected parts. Maybe it’s actually quite useful to think about digital as a counterpart to analogue, in order to describe analogue. I can say digital is more concerned with creating boundaries and categories than analogue. If I go back to analogue, I think it sounds less “accurate”. As an individual I may be more of the analogue “mindset” but that doesn’t mean I have a preference for analogue sound all the time. I’m trying to think about the emotional animal and I think the more pictorial something is, the more it allows me to see and feel the successive changes in emotions—and the same with sound, sometimes. I realise that this is completely subjective and personal, but you did ask.

Are you someone who covets gear?

When I started to get a taste for making music, music that I tentatively hoped someone might release, to a degree yes. I think was guilty of coveting certain “classic” drum machines and synths. Before that, when I was at art school and the sounds were more free and real world, I didn’t care about what equipment made them. I only cared about how affecting it was to the listener. In fact, the more confusing the source noises the better. Eventually, after owning some equipment that I thought I ought to be using to make “real music”, I realised I was pretty bad at it, and also that it was well-trodden ground and wasn’t necessarily a good creative approach for me. Or at least it wasn’t something I should really chase after it.

The beginning of Optimo is often talked about in terms of reacting against where dance music was headed at the time, but in more positive terms: what were you hoping to create with the night?

Simply to take the opportunity for ourselves to play a real breadth of music in a club, something we really craved and that I personally had not been brave enough to do very often before. There was no manifesto or strategy and I wouldn’t say it was particularly principled but I would say, for want of a better term, that there was an anarchic spirit to what we were doing. It was precarious at times and it felt that anything might happen, which suited us fine. We had a mutual desire to be like this and to our surprise it created a place that attracted a wonderfully diverse and open-minded community of freaks and misfits.

How important was it bridging the gaps between live music and DJing?

It wasn’t a self-conscious thing particularly—to attempt to bridge this gap—but we saw no reason why live music, impromptu performance, film, improvisation, protest, noise, light, any of these things, couldn’t work alongside playing records. So we threw it all in. 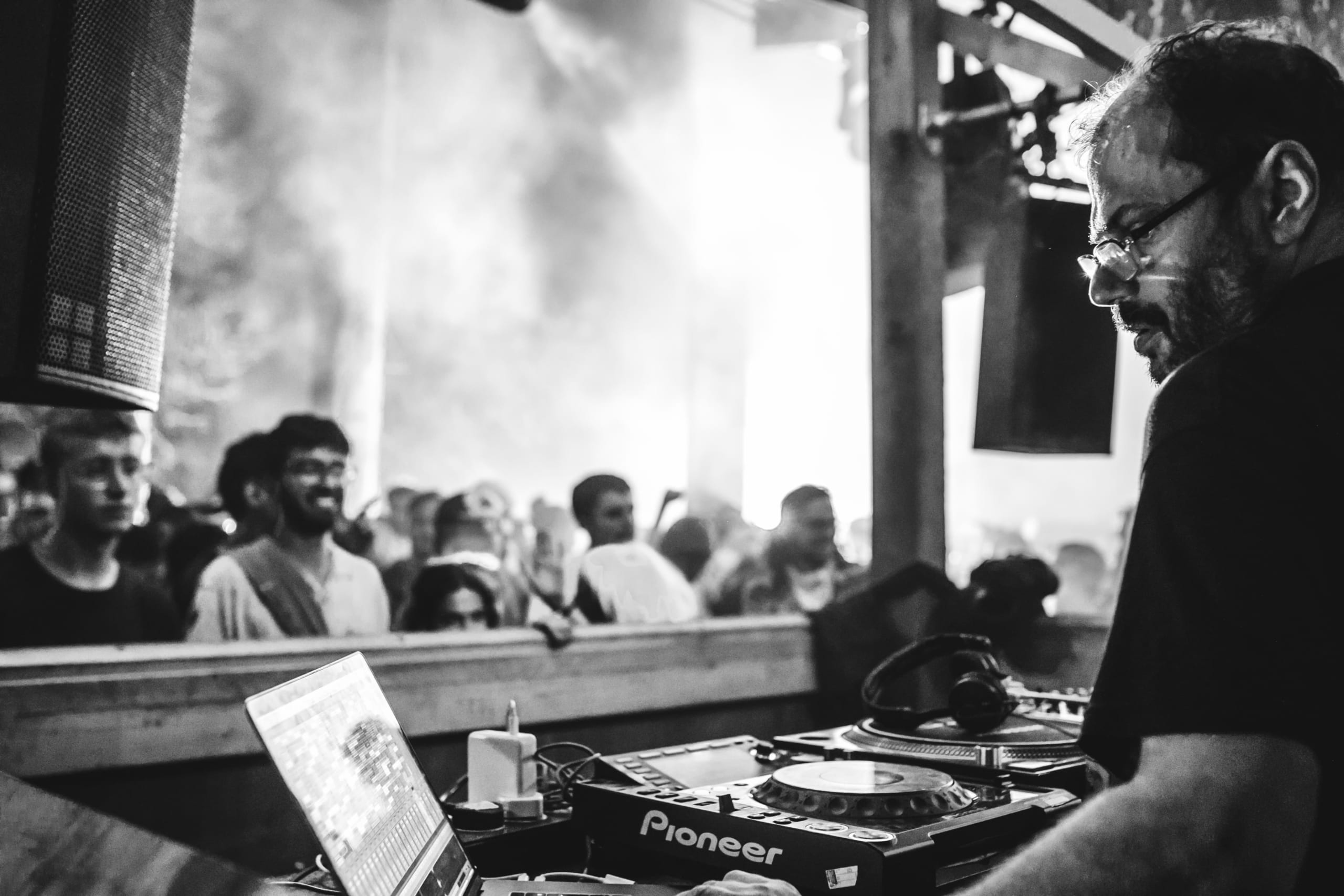 Optimo started before the internet had really got its teeth into club culture. What attitudes have you taken from that pre-broadband era?

I like the idea that if you weren’t there you weren’t there, and if you were there you were really “THERE”. Obviously not in the sense of creating anything exclusive, quite the opposite in fact—you might be having a better or worse time elsewhere and that’s fine—but when I think back, maybe the thing that was special was that there seemed to be an importance placed on “the beginning” and “the end”, meaning that one’s experience was thoroughly appreciated because you knew it was going to end and it would be be gone forever. This consciousness of a beginning and an end left room for a real experience in my opinion; a sense of anticipation, excitement, a group feeling, a oneness, undocumented, in the moment and no rewinds. I love that.

Optimo started in the Sub Club. I read an interview in which you describe the sound there as having “its own character”. What do you mean by that?

How could I put it… it’s very “loud”. Seriously though, we don’t do our own regular party at the Sub Club anymore, we play more as guests of the club and it’s a fantastic place to DJ. Second to none really. The booth is so right, so close to the crowd but built in a way that the turntables are properly isolated, immune to any vibration or getting bumped by the crowd. The monitors are brilliantly positioned and Sean, the in-house engineer, is present all the time, always so helpful, working the system all night and helping with artist changeovers. The room is a basement, the dance floor ceiling is just above head height with a Martin Audio rig. It sounds powerful and just a little rough which is maybe the “character” I was referring to. Certainly enough detail but not so clinical and posh. And it’s loud.

Residencies are an idea that seem to be making a modest return in places. Do you think they still have merit in the touring-centric world of contemporary clubbing?

Of course, let’s not forget about community. A residency, for me, must be a weekly party hosted by the same DJ, or DJs, every time. I don’t really consider a monthly, or bi-monthly party a residency particularly, it just doesn’t have that closeness which gathering every week for an extended period does. I mean, if you attend church, or bingo, or therapy you go every week. But yes, back to the idea of community within a clubbing experience, this is something a strong residency can create for sure, and it’s something very worthwhile. Something regular to participate in, something that can grow and somewhere that interaction with others is welcomed and is safe. I have noticed that the smaller parties we play while on tour, the ones anchored by a resident, are often the most fun. It’s perhaps because there is such trust between the crowd and the host. Manfredas’ Smala party at Opium in Vilnius, Lithuania is a great example of this.

So much of what you play feels in the room—either through analog synths, or live instrumentation. Is that something you recognise? Is the physicality of music important to you?

I think I know what you mean. With live instrumentation, for me percussion especially, I really love that physicality I think you’re referring to. It’s both what’s being hit but also how it’s being hit. It’s as much about the colour and texture of individual hits as the rhythm and sound itself. This is all really physical and with that captured on a record, when you go to play it, put it “in the room” as you say, you need the right sound system. It’s paramount if you’re gonna get anywhere with your crowd, and if the sound system you have on a particular night just isn’t adequate to convey this physicality thing then the experience for listeners is substantially lessened. It pretty much fails and maybe you have to revert to playing something different. The dynamics are still actually present, I guess, but not as exciting without a system that to a degree is able to engulf you and make you actually “feel” in a physical way. From a DJ’s point of view, of course it’s frustrating to have to avoid certain records because you know they just won’t be heard properly on a system that is just too “polite”, but that’s just life. Maybe because a crowd is a physical thing in itself, interacting with the music, that physicality to the music will enhance their interaction. Does that make sense? Private listening maybe less so but yes, in a group situation I’d say it is really important to us.

When you’re listening to records, how much do you think about how they’ve been made?

Too much. I hate it and I know it’s because I still feel I’m on this learning curve of production. Also, I think I’m a bit of a dissector anyhow, with everything. I find it intriguing where something has come from. For example, a new sound or genre that borrows from something that came before, in fashion a look that used to be “in” and is coming back, figuring out the ingredients of a dish, seeing new art that has pulled from some different sources. Combinations of materials, sounds, tastes, visual things, all interest me so I naturally do that; but yes, I think with music, I definitely separate out a lot when perhaps I would be more satisfied with the overall experience if I didn’t. This tends to happen more in private when I’m listening alone rather than with live sounds shared with others.

How do we make sure dance floors stay exciting?

The dance floor is a special place. It’s an actual, designated area, where people come to truly lose themselves in the music. They can escape for real, experiencing a genuine sense of joy, dressing how they want, performing, or quite simply just moving their bodies in a way they probably wouldn’t in the outside world. For this reason, we need to make sure dance floors are safe for everyone to feel as though they can do this. If we are gonna preserve the dance floor for the excitement you’re referring to, an excitement that is surely aligned with a sense of freedom, then this matters more than anything! Apart from this I’m happy also to see that more clubs are actively discouraging or in some cases banning phones on the dance floor, and drinks too. 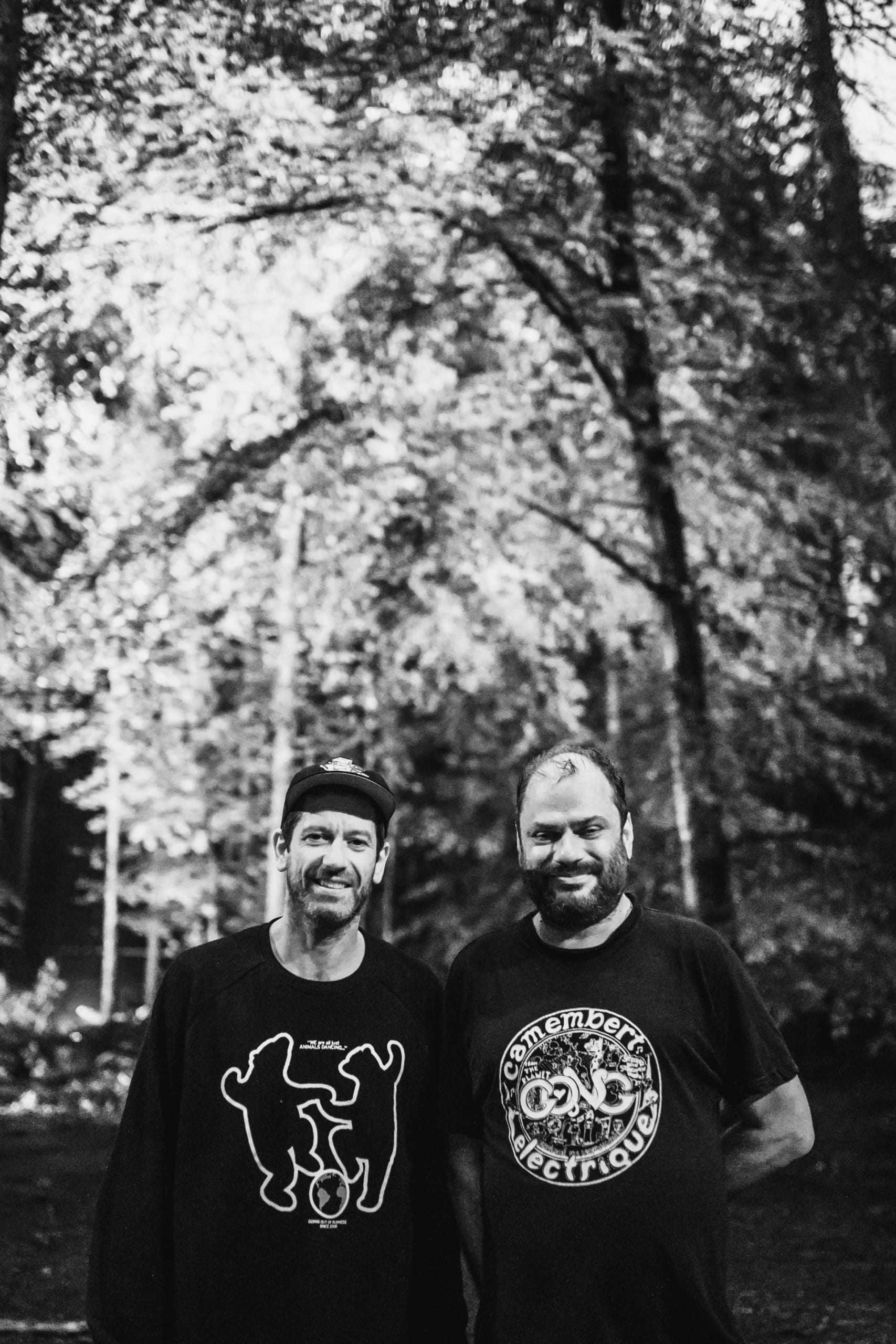 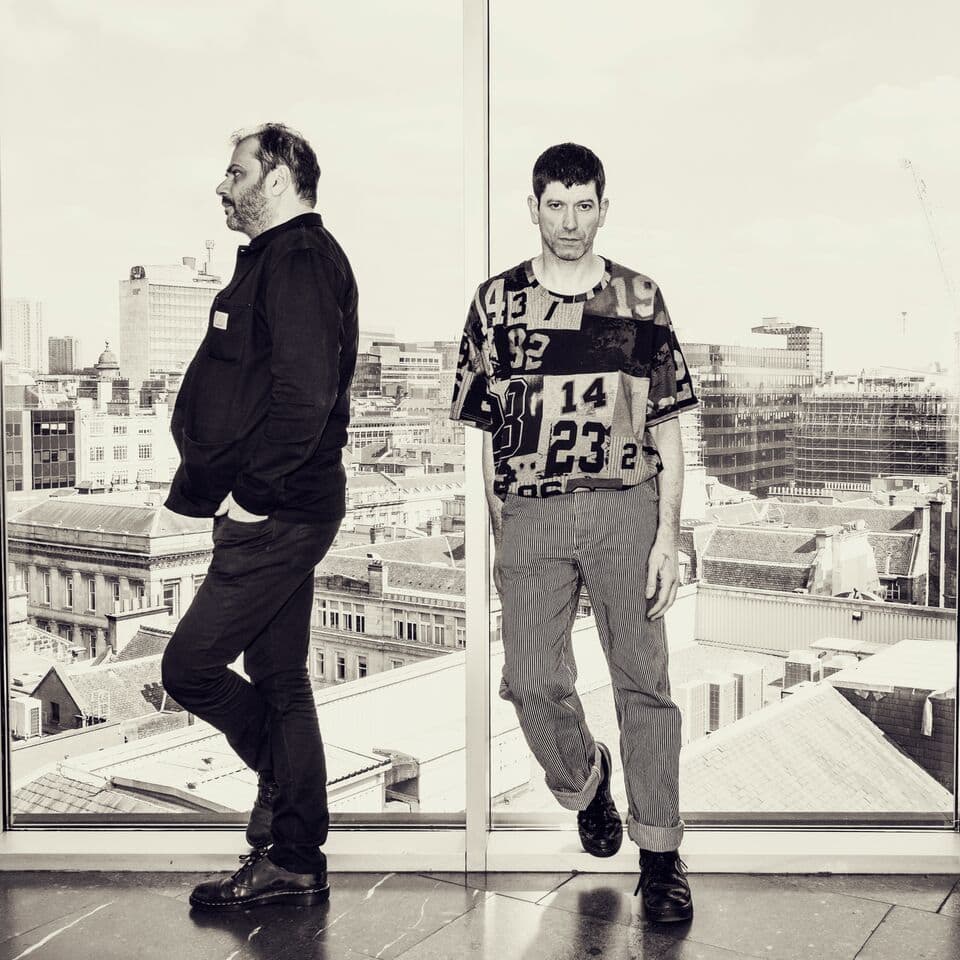 Optimo are the duo JD Twitch and JG Wilkes. They each have over 20 years DJ-ing experience and in the last decade have become both renowned and highly respected for their memorable and ecstatic deejay sets. Twitch and Wilkes exhibit a unique disregard for genres and musical restrictions in their craft, creating a nightclub experience that strikes out into territories far beyond the accepted boundaries of club music.