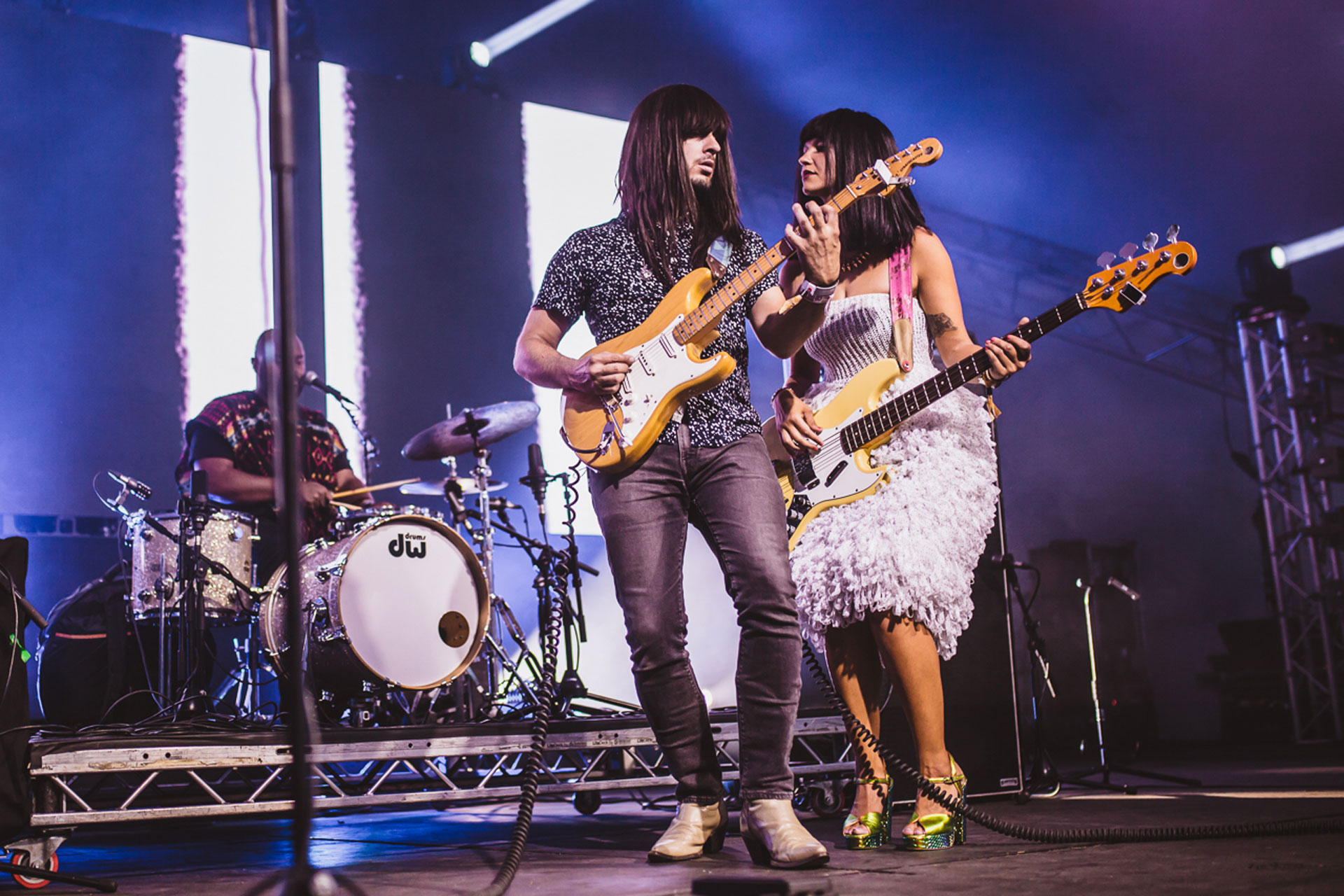 If funk is a universal language then Khruangbin are its chief translators. The three-piece band from Texas have spent the best part of the past decade joining dots around the world together in the pursuit different sounds, uniting them through their singular vision.
Mark Speer (guitar) and Donald “DJ” Johnson (drums) first met playing in the gospel band at Rudy Rasmus’s St. John’s Methodist Church in Houston. When Speer then met Laura Lee (bass) through some friends, late nights spent hanging out as a trio soon turned into the seeds of the band as it now is. As their name – which means “engine fly” in Thai – indicates, one of their earliest influences was Thai funk and psychedelic rock; an inspiration that shaped their debut album The Universe Smiles Upon You, which was adventure and motion of travel that characterises their musical universe – this year they released their second record, Con Todo El Mundo, which draws on music from Spain and Iran. It’s a motion that exists in practice as well, their music exists to be played live, something they make sure to do tirelessly around the world.
We spoke with Laura and Mark about their global influences, and the benefits of recording in a barn. 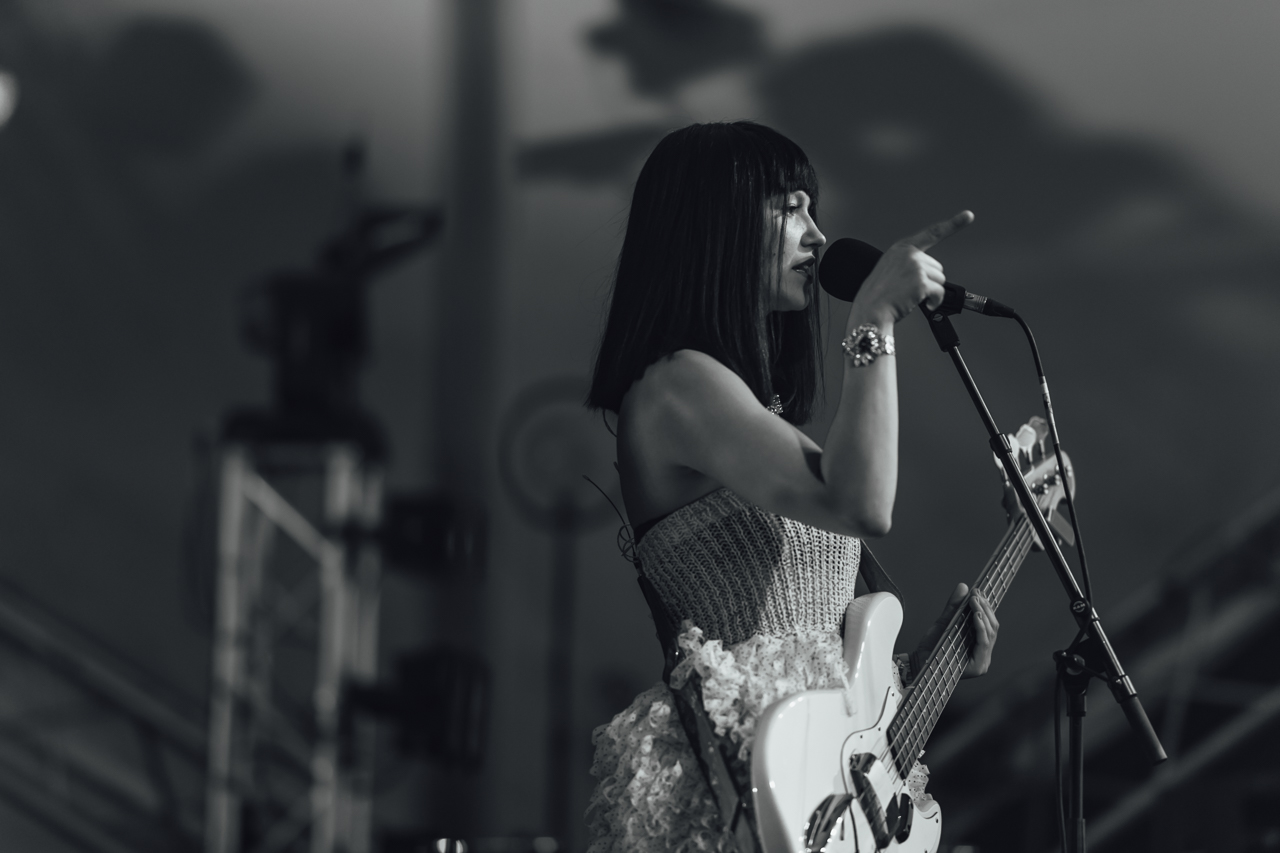 Mark Speer : To me, ‘analogue’ means that the machine has a chance to introduce interesting texture and variables into the work. Ones that aren’t possible to achieve in a digital context, because digital is clean.

As a band, or a friendship group, what music did you bond over?

Laura Lee : Before we were ever a band, the three of us used to meet every Tuesday at Rudyard’s pub in Houston. The music was great there; Marvin Gaye, 90s hip-hop, Arthur Verocai, it was whatever the bartenders felt like. It fueled the long, obsessive conversations about music we’re still having today.

Thai funk played a huge part in your founding phase. What makes that sound unique?

Mark Speer : Just like any other funk-influenced music from across the world, they take the American funk/boogie/disco sound and run it through their own sensibility, taste, rhythm and language.

Laura Lee : The tonal language of Thai is especially interesting to me, because that’s what makes it sound like something that doesn’t occur in Western music. That, and the little tiny bell over all Luk Thung music. I love that sound, it makes it so unique.

Mark Speer : And a bamboo mouth organ. There’s something about those instruments, when you play them against traditional Western electrical guitars, that creates something super special.

Given how varied your influences are, how important is record collecting, and sharing music with each-other, to Khruangbin?

Laura Lee : It’s incredibly important. On tour we go digging just about every other day. Records from every time and place have always been, and will continue to be, our best teachers.
In terms of sharing music, we’re just starting to figure that one out now. People were starting to ask us a lot for our source material, and where to get started finding Thai and other types of funk. So we’ve begun DJing in addition to our live shows, and we’ve also added a monthly NTS radio show to our books. We’re not those people who try to hide our references; it’s actually the opposite, we want to find as many ways as we can to get interesting music out to the world. It fuels the search. 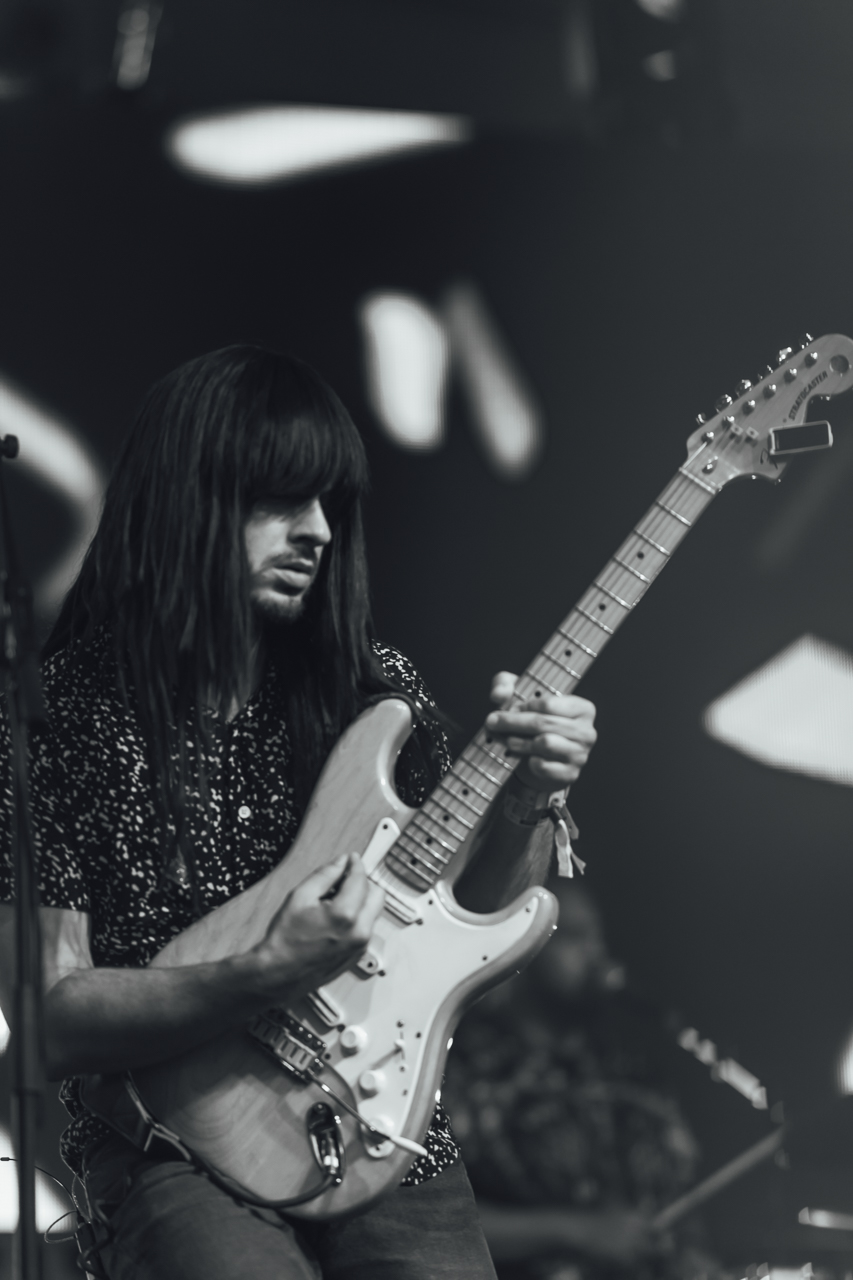 What’s something you can’t stop listening to at the moment as a group?

Mark Speer : We’ve been super into our 45”’s lately. I bring our portable Vestax record player into our dressing room and bust those out every night.

How much time to you get to spend in record shops? Where are your favourites?

Laura Lee : It’s one of the best things about being on the road. Every town we stop in seems to have a gem in it. Some of our favorites have been ZudRangMa in Bangkok, Invisible City Records in Toronto, Deform Music in Istanbul. Given the space restrictions on a tour bus, we’ve been sticking exclusively to 45”’s lately, which has been a good limitation but also a challenging one. Unlike records, they’re rarely properly organized by shops, so it requires quite a bit of patience to sort through. More satisfying when you find a great one though. 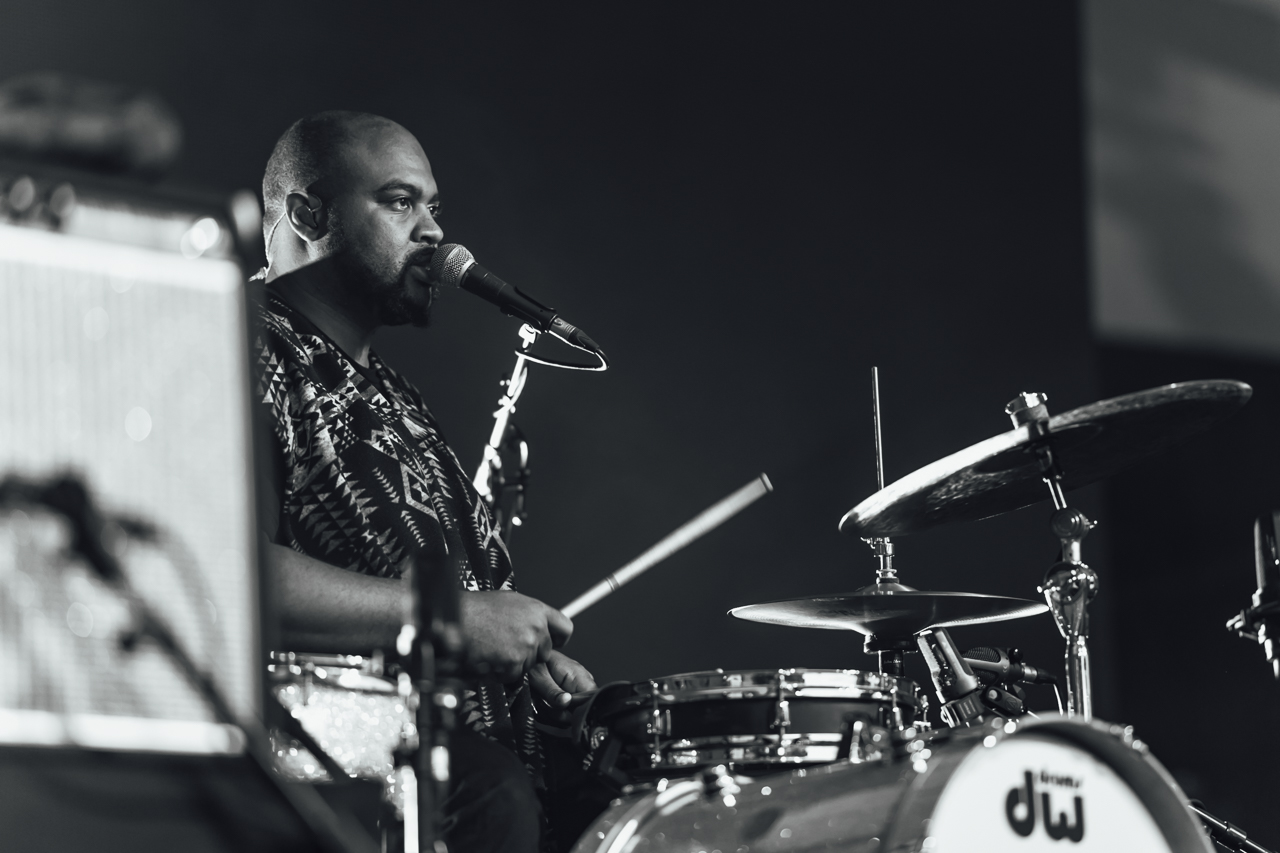 You said in a recent interview that you record in a barn? Talk us through the set-up.

Laura Lee : The barn… that’s about as analogue as it gets. It’s not a ‘barn studio’ or something fancy. It is literally just a barn. Corrugated metal. Unsealed from the natural environment. And usually with a few critters who’ve dug homes in the ground. Last time there were hornets nesting in the corners.
Our engineer Steve has a portable studio, so we spend a day encouraging the animals and bugs to spend some time elsewhere whilst setting up the gear—including at least one mic that just sits out in the field amongst the cows and flowers.
The doors to the barn can be open or closed, depending on what kind of sound we’re after. And depending on the weather, there can be sounds of rain or a creaky barn that spill onto the recordings. But we always lay things down in one take, live—so what you get is what you get.

What are the benefits of making music in such a remote space?

Laura Lee : There’s the obvious stuff, like lack of wifi and other distractions. But there’s also the feeling of the place that’s hard to describe. Space for ideas to breathe. The biggest sky you’ve ever seen. It’s a little microcosm that exists outside of the rest of the world, with its own pace and time. I can’t imagine our sound coming from anywhere else but there.

Are you a band that covets gear? What are your most recording tools?

Laura Lee : We keep things pretty simple, but we’re really attached to what we’ve got. I love my bass, and the strings that haven’t changed since I bought it. Those strings are going 8 years strong. (Finding some wood to knock on now.) My Fender Bassman 10 amp and recently my Acme Motown WB-3 direct input, which was modeled after the direct box used in original Motown recordings.

Mark Speer : My guitar, and my field recorder. I have a Roland digital field recorder that I take everywhere. The ambient sounds I’ve recorded on it have ended up on all our records. 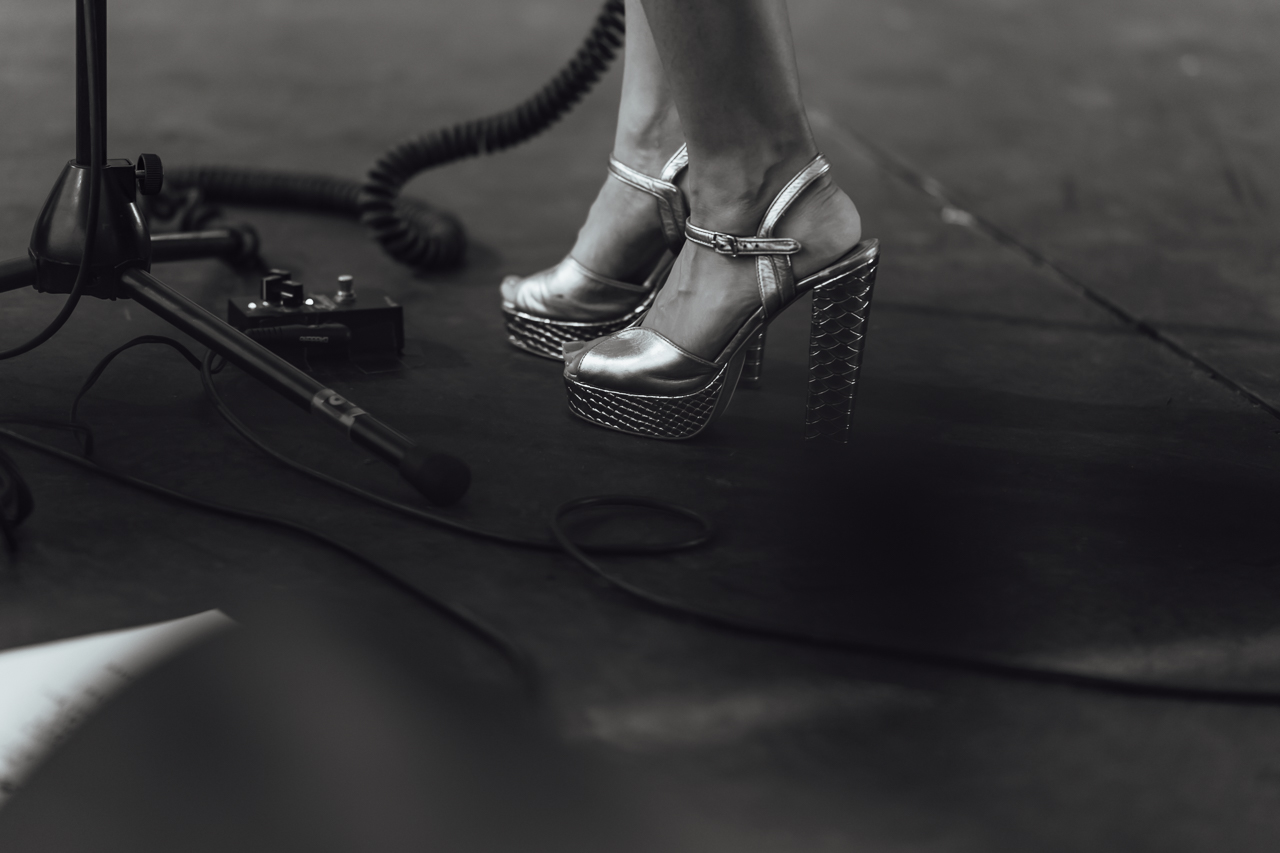 Your most recent album is influenced by pre-revolution Iran and the Middle-East more broadly. Can you speak to that influence?

Mark Speer : I think I first heard a Googoosh song somewhere, loved it, and it led me down the rabbit hole. Next thing you know, I was staying up all night, going down Youtube and Discog trails finding out who made what, who played on what, what else they did, and why everything seemed to stop in 1979.

Laura Lee : Iranian music is so romantic, but also so tragic. Heavy and emotional, but in a way that makes beauty of the pain. I find that juxtaposition really moving.
Specifically in terms of instrumentation and production, what was happening that was so different in that part of the world at that time?

Mark Speer : In a lot of ways, Iranian funk sounds like funk and soul from the Western world. At least from a production perspective. That’s what makes it easy to connect to. Funky drums. Phasey envelope filter guitars. But it’s also layered with very specific Persian scales and ornamentation that you only find in that part of the world. The end result is incredible.

What’s your writing process? How does a Khruangbin song start?

Laura Lee : A Khruangbin song starts with a drum loop. I’ve got a bank of drum loops that either DJ has recorded or that Mark’s pulled from some of my favorite songs. I pick one at random, loop it in Ableton, and record myself playing on top of it. Then I send Mark that recording, he chops up the bass lines he likes the most and records guitar on top of that. The results of those become our drafts that we then take to the barn. That’s where we figure out how they all work together and record them. Much of the time, the recordings on our album are only the second or third time we’ve played them through.

Even on record your music sounds like it’s unfolding live. How far is that true of your process?

Laura Lee : For us, an important part of the recording should be that it is unfolding live. It’s hard to capture the same spirit when you’ve played a song a million times. Bass, guitar and drums are all recording live at the same time. Then we pick our favorite take and we add percussions and vocals if needed.

While there’s that psychedelic flavour, your music also feels very human and tactile. How do you keep it sounding real?

Laura Lee : I think it’s as simple as our recording process. It’s as real as it gets—dirty barn, cows, and live instrumentation. The psychedelic part I think comes from the way we loop things and our layered vocals. 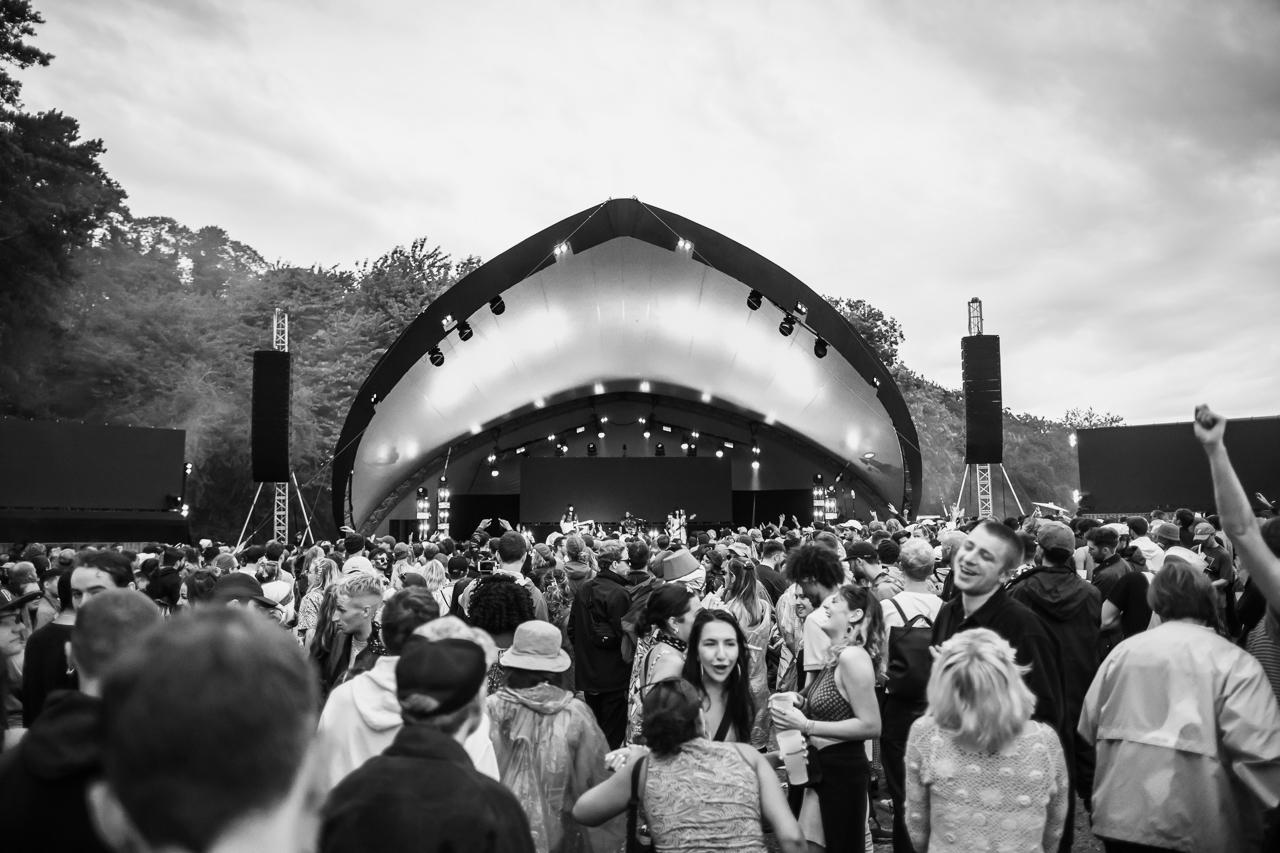 Where are you favourite places to play?

Laura Lee : That’s kind of an impossible question really, since no two places feel the same. I loved playing the Best Kept Secret Festival outside Amsterdam recently, the crowd was one of the happiest crowds I’ve ever seen. The Vega in Copenhagen, the Fillmore in San Francisco. We’re lucky we get to play in such amazing places. It was also cool playing in the forest at Lock-In Festival, and on the rocks by the ocean at Love International in Croatia. Anywhere we get to play in nature would go on my list.

How do you know when a show is going well?

Laura Lee : When the crowd is having a great time. You really can feel the mood of people from stage. When everybody’s enjoying themselves, dancing, singing along… there’s no better feeling on earth.

What’s the greatest compliment someone could pay Khruangbin?

Laura Lee : A nurse recently told me that she plays Khruangbin for her terminal cancer patients because it brings them a sense of peace. That’s the greatest honor I can imagine. 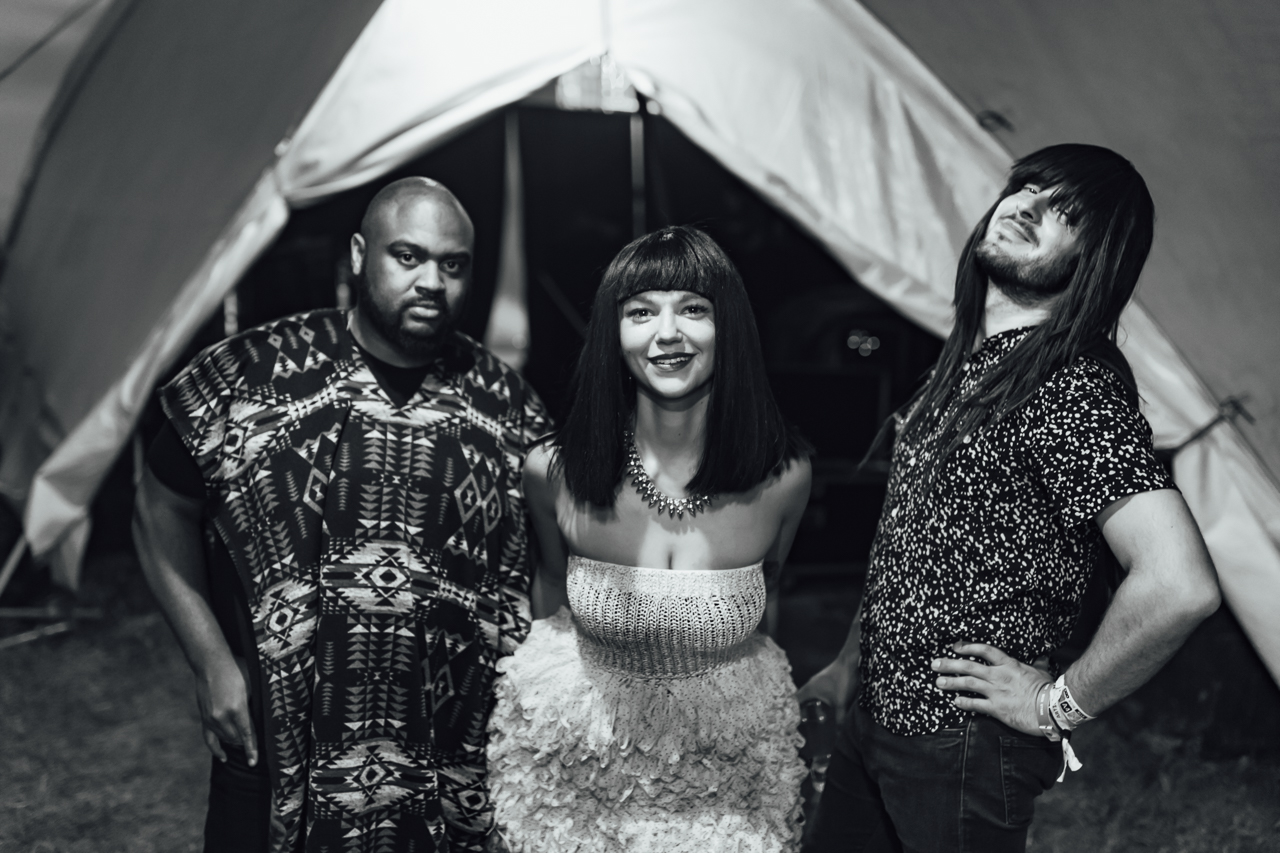 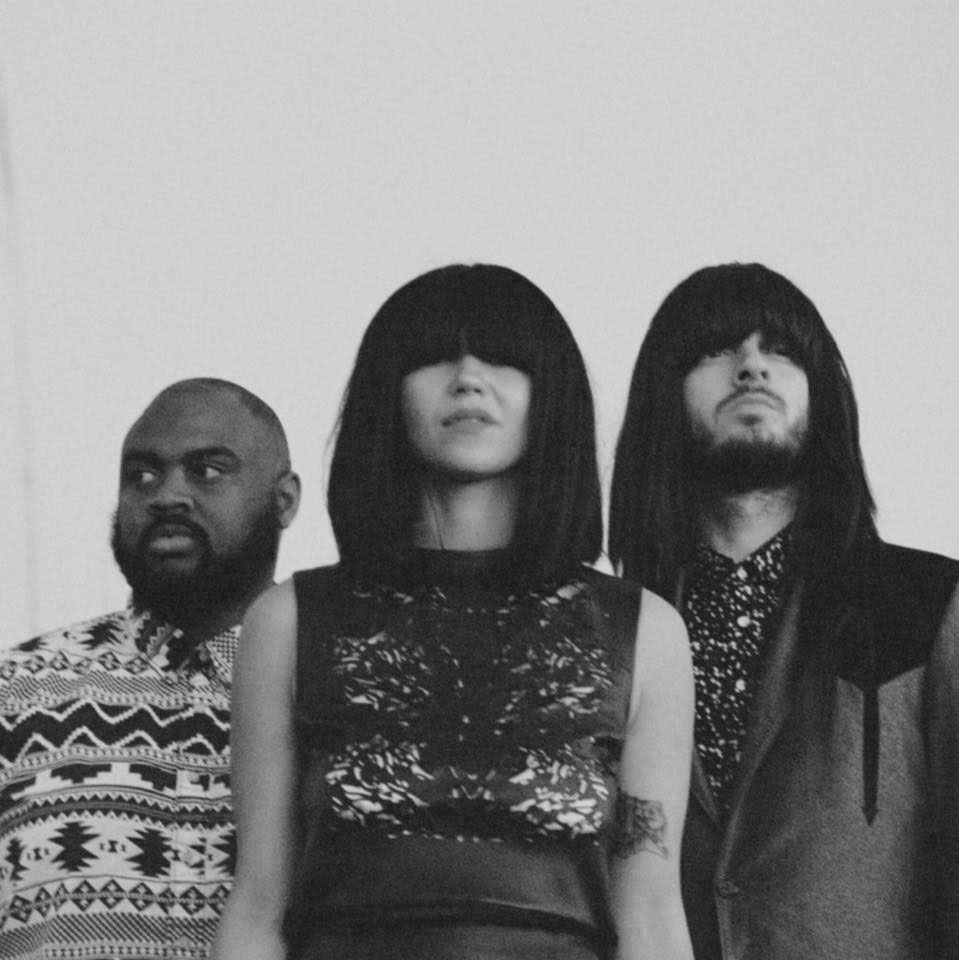 Khruangbin is formed of Laura Lee on bass, Mark Speer on guitar, and Donald “DJ” Johnson on drums. The globetrotting Texan trio’s sound is rooted in classic soul & RnB and informed by psychedelia, dub and music from around the world – all captured in widescreen and performed with impeccable style.
Whereas their 2015 debut album ‘The Universe Smiles Upon You’ was influenced by 60s and 70s Thai cassettes and compilations of southeast Asian pop, rock and funk, 2018’s ‘Con Todo El Mundo’ hops east over India to take inspiration in similarly underdiscovered funk and soul sounds of the Middle-East, particularly from Iran. Laura Lee explains the album’s title: “My grandpa would always ask me ‘Como me quieres?’ (‘how much do you love me’?), and he’d only ever accept one response. ‘Con todo el mundo’ (With all the world).”