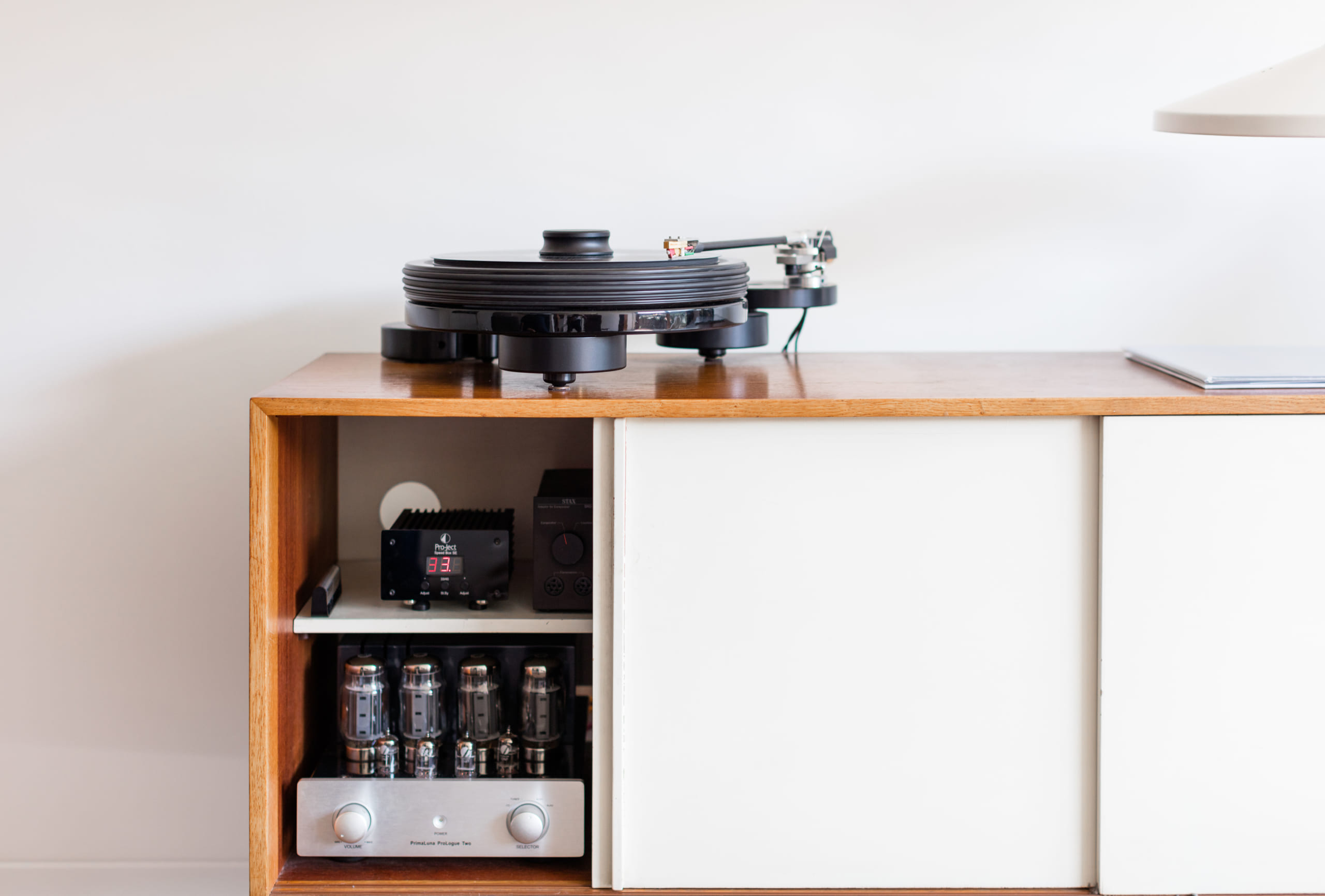 If you spend some time scrolling through the abundance of inspiring interiors that house personal analogue sound set-ups, the chances are that you will come across images of James’ Webb listening space in the iconic Barbican. The images have been shared countless times across various platforms often without deeper thought to the story behind hifi system. So when James offered to share his hifi journey with us, we were deeply moved and grateful…

In James’ own words…

“My interest in hifi started in the early 90s. I was training to be an architect while also being heavily
involved in the Perth rave scene. I really enjoyed having a decent system to chill out with the following day.I had a classic 90s system: Rega Planar 3, Pioneer A400 amp and Tannoy stand mounted speakers. (image 1990).I also wanted a system that I liked the look of. This is a duality that has continued for 30 years.

After leaving Perth to work in Germany for 2 years and then Amsterdam I was without a system for 4 years. 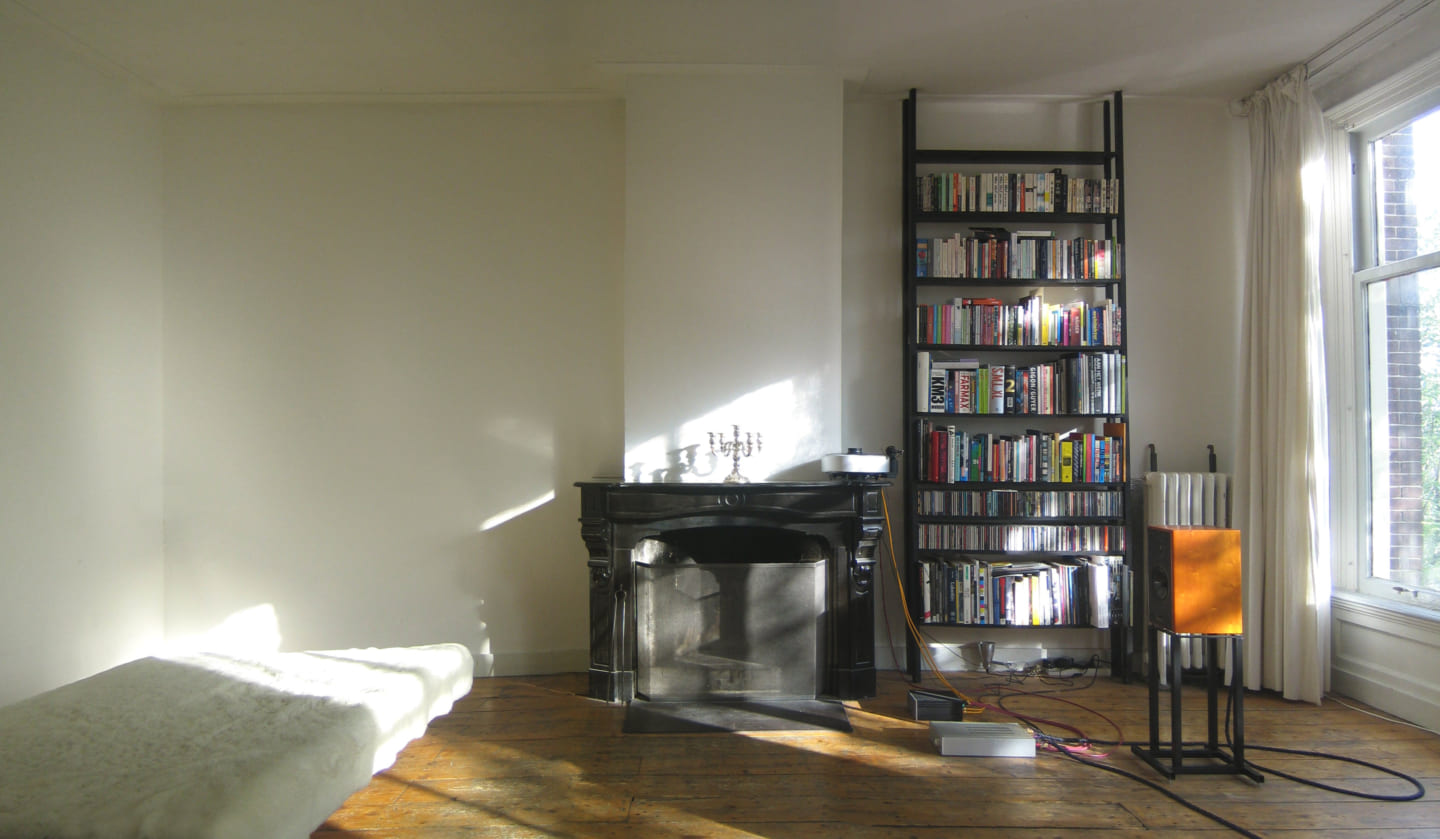 When I settled in Amsterdam I lived in a great canal house, with a big front room perfect for a system. I started from scratch again and bought a Project TT, Audio Analogue Amp and the current version of the Epos that I had had in Perth. As an architect the aesthetic of things was always important. Although I was interested in the best sound I didn’t want a hifi that looked like something stacked up on a mini oil rig. 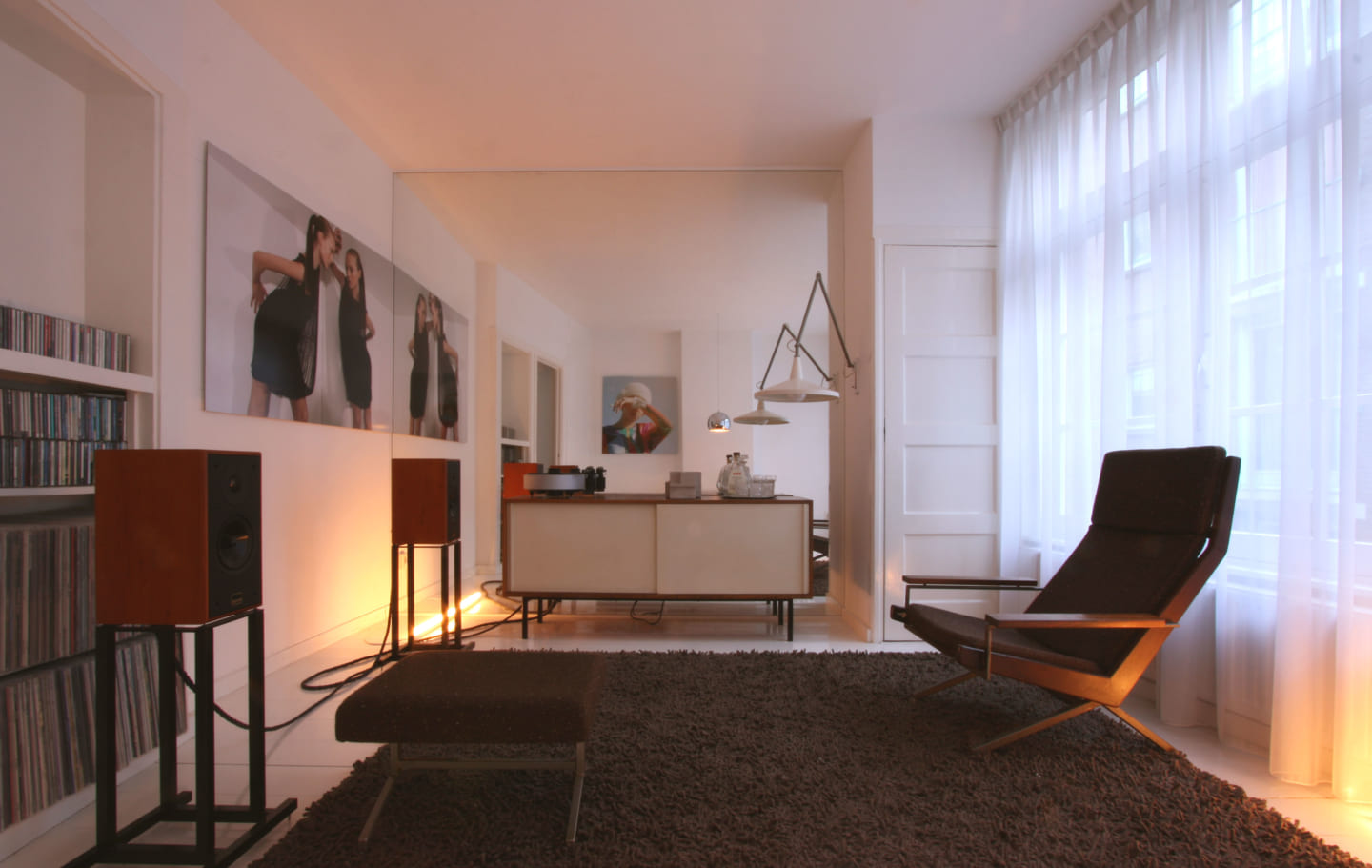 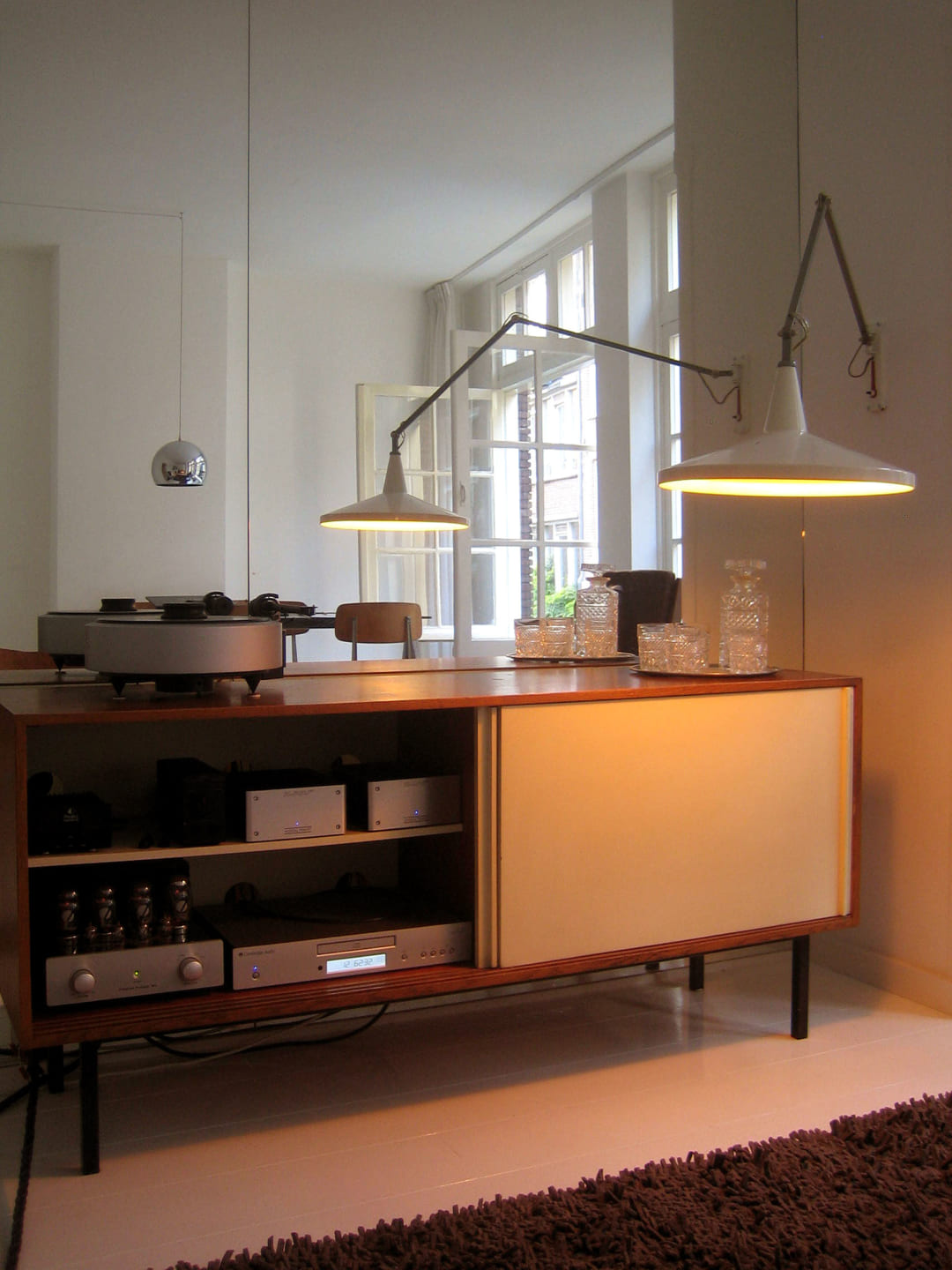 I preferred to have the system on the floor rather than on a hifi stand. I home auditioned the Living Voice speakers but soon moved to a smaller apartment and stuck with the Epos. I did move on to a valve amplifier from the Dutch company Prima Luna. The change to valves was significant and one that I have not strayed from. The smaller apartment (images above) was challenging for a hifi. I could only fit in a one person listening chair and I had designed the apartment with very reflective materials. It wasn’t ideal. I did however find a fantastic mid century side board from Martin Visser that accommodated all the components with the turntable on top. 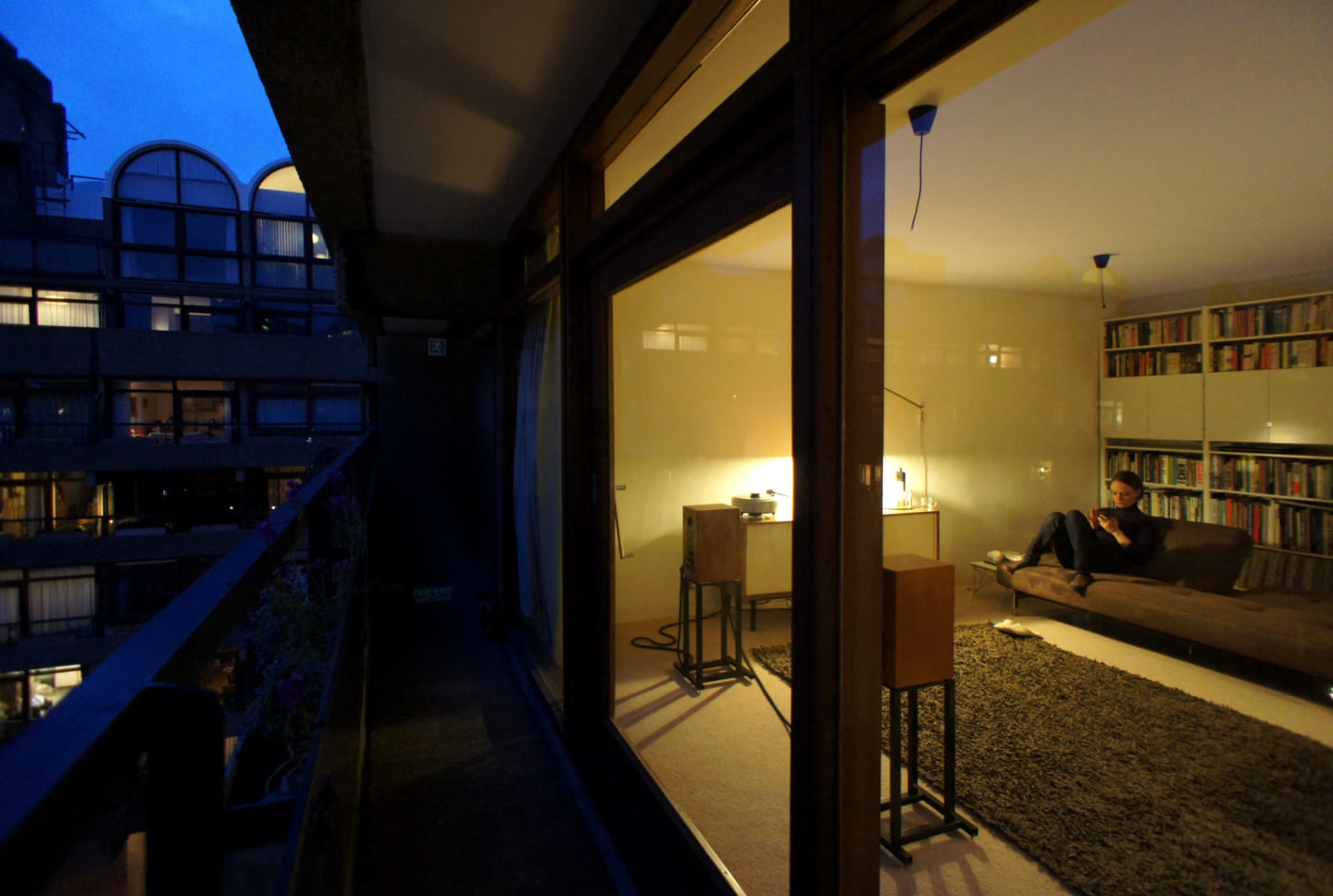 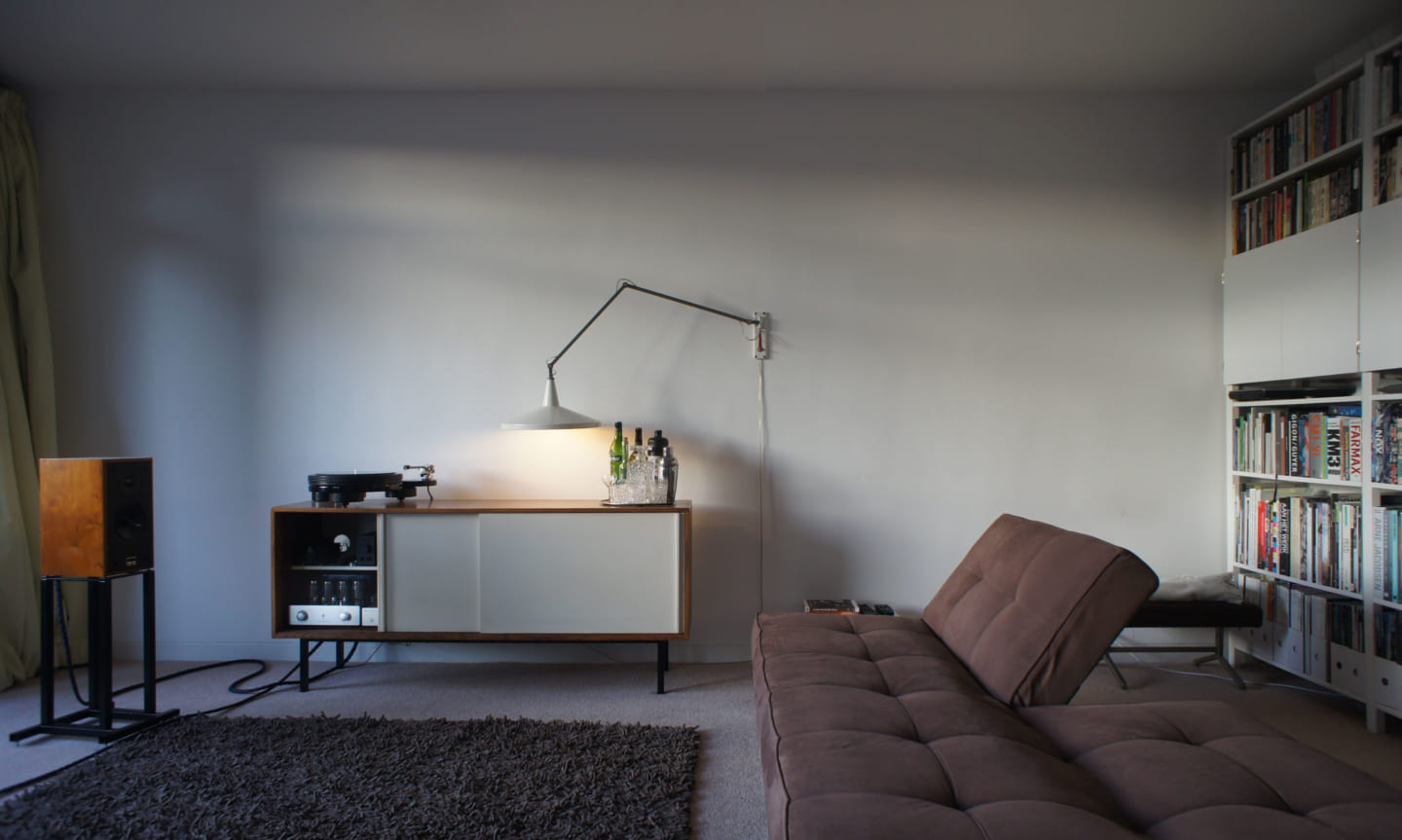 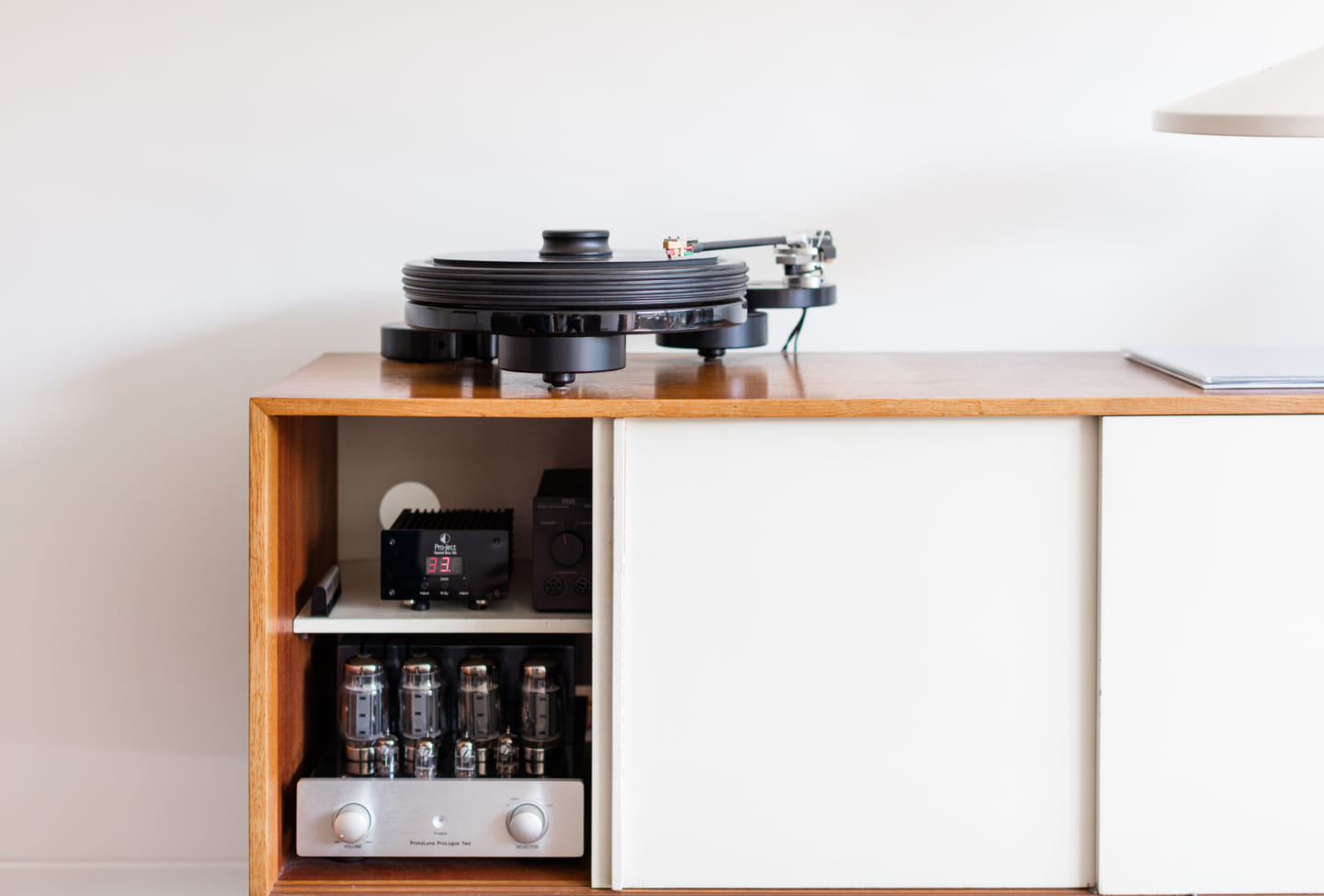 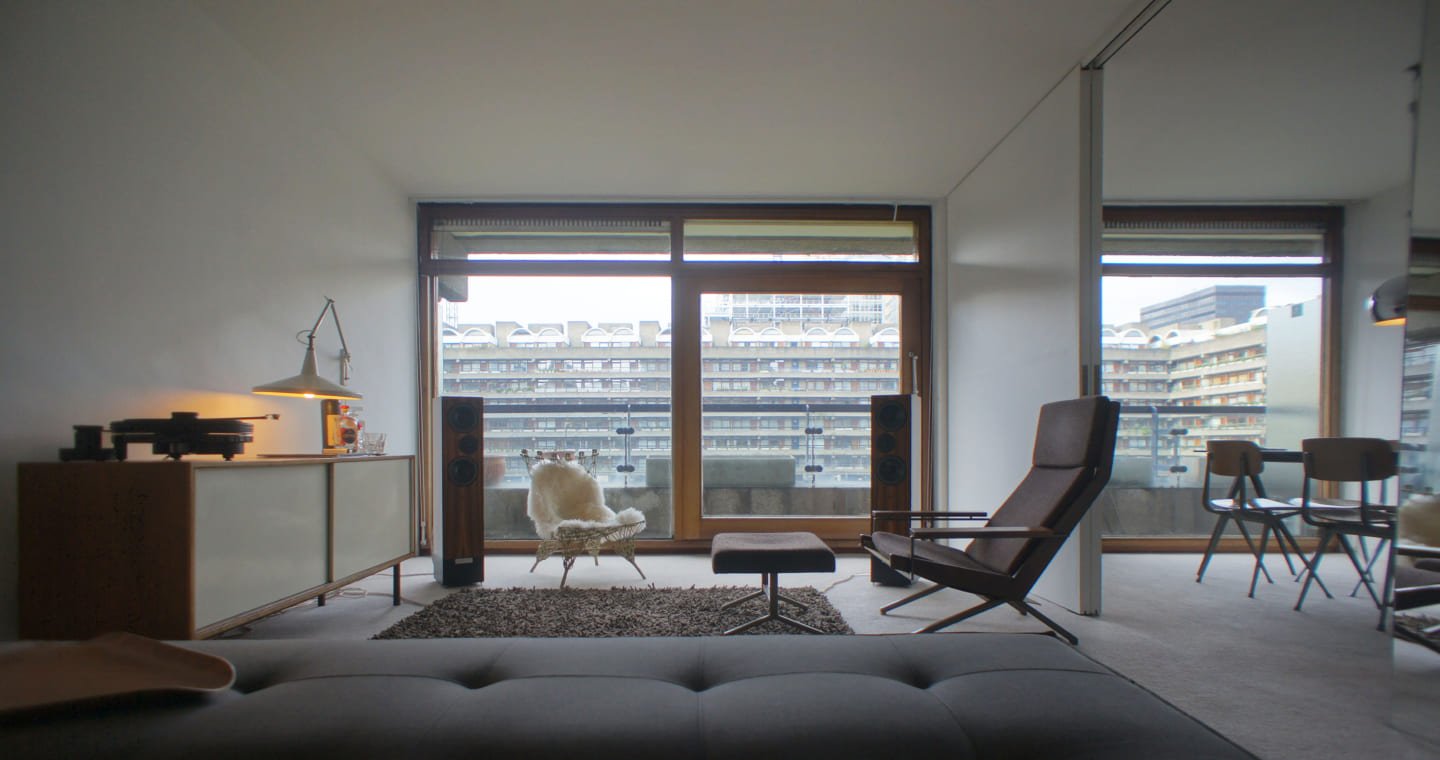 In 2011 I moved to London and lived in the Barbican, a huge brutalist building in the centre of London. First I rented a studio. The acoustics were really good, and no problems with the neighbours. Then I lived in a one bedroom flat. While in London I upgraded the turntable to a Nottingham Analogue Spacedeck 294, which was a huge step up and also changed the speakers to the Living Voice that I had trialed a few years ago in Amsterdam. 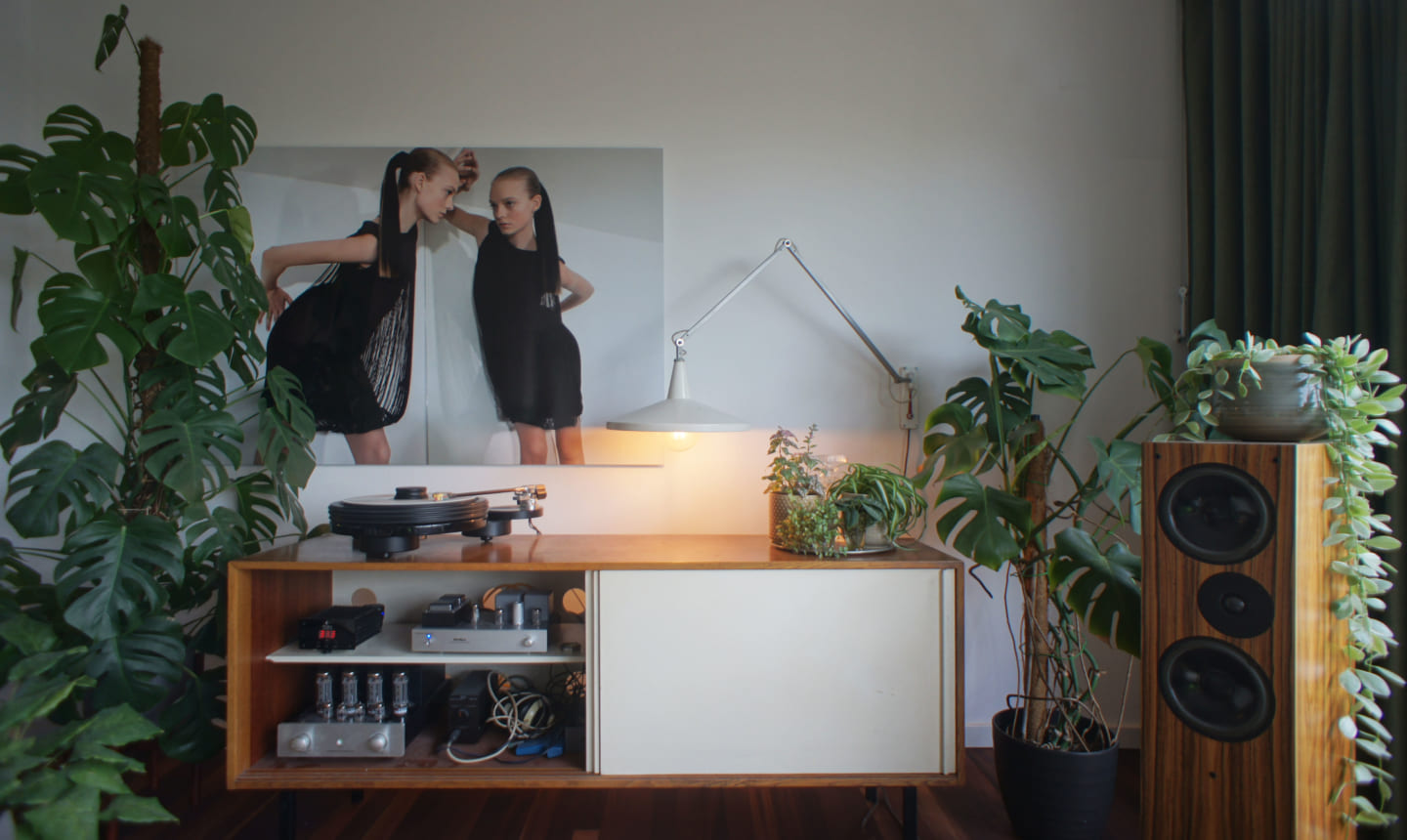 I bought a modernist flat in 2018 and have been slowly renovating it. It took a long time to get the hifi to sound right. I am a firm believer that you need to experiment with speaker placement, even if you think its good try another place. In the new apartment (image 2018 01 and 2018 02) a large living room gives the Living Voice speakers room to breathe but unfortunately the sound insulation between neighbours is less than ideal. 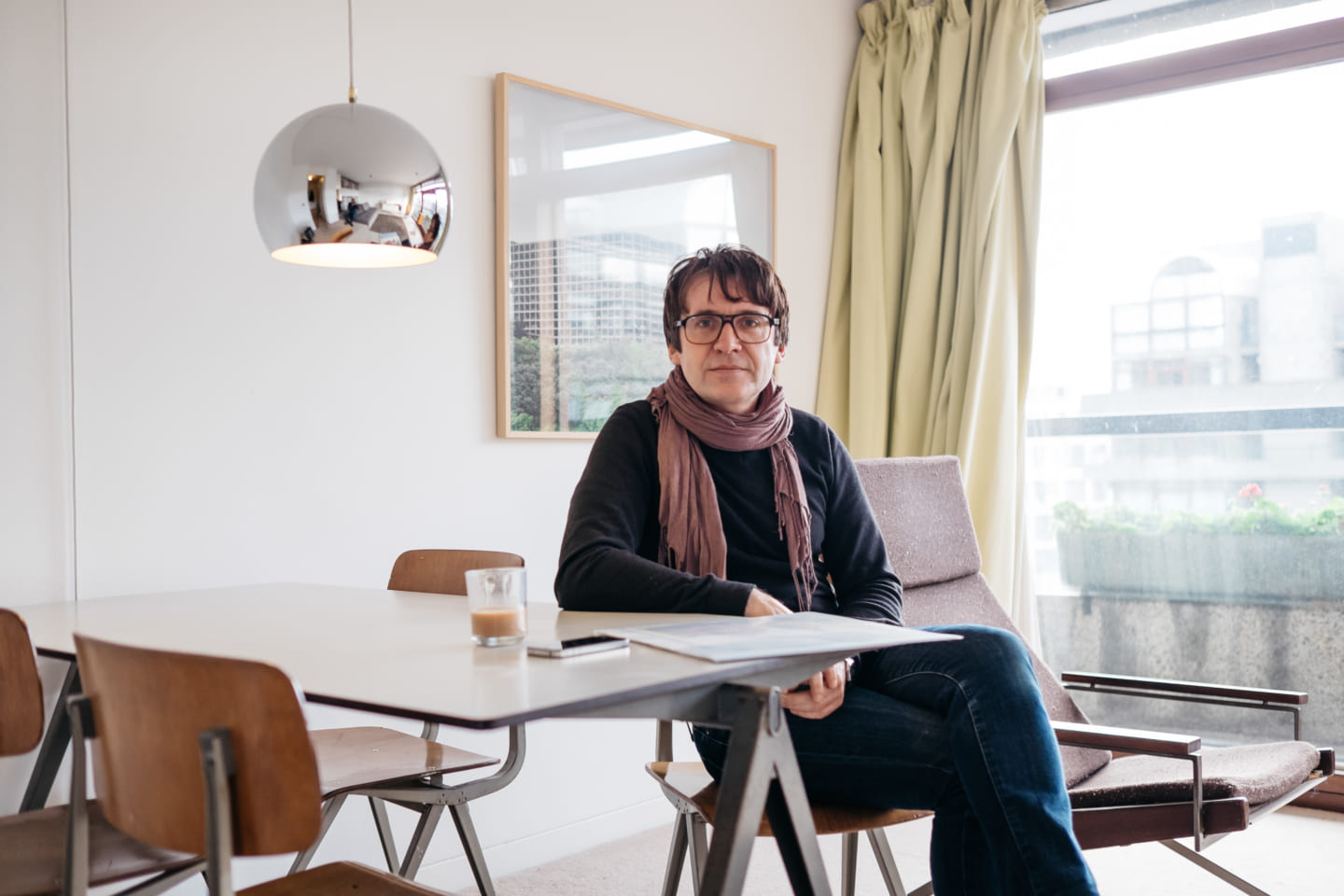 My desired modernist aesthetic of clean, quite sparse interiors is not a perfect starting point for a hifi system. You need some absorption and varied refractions, this is a challenge that I still am working on. I would never install ugly acoustic panels in my living room but I understand the need to deal with room as a component of the hifi. I am a strong believer that the room and speaker placement can bring huge rewards to sound quality, you just need to balance that with other domestic requirements.

Of course there are loose plans to upgrade this and that, but I do enjoy immensely what I have now. Buying new music and spending time listening to it is important.”