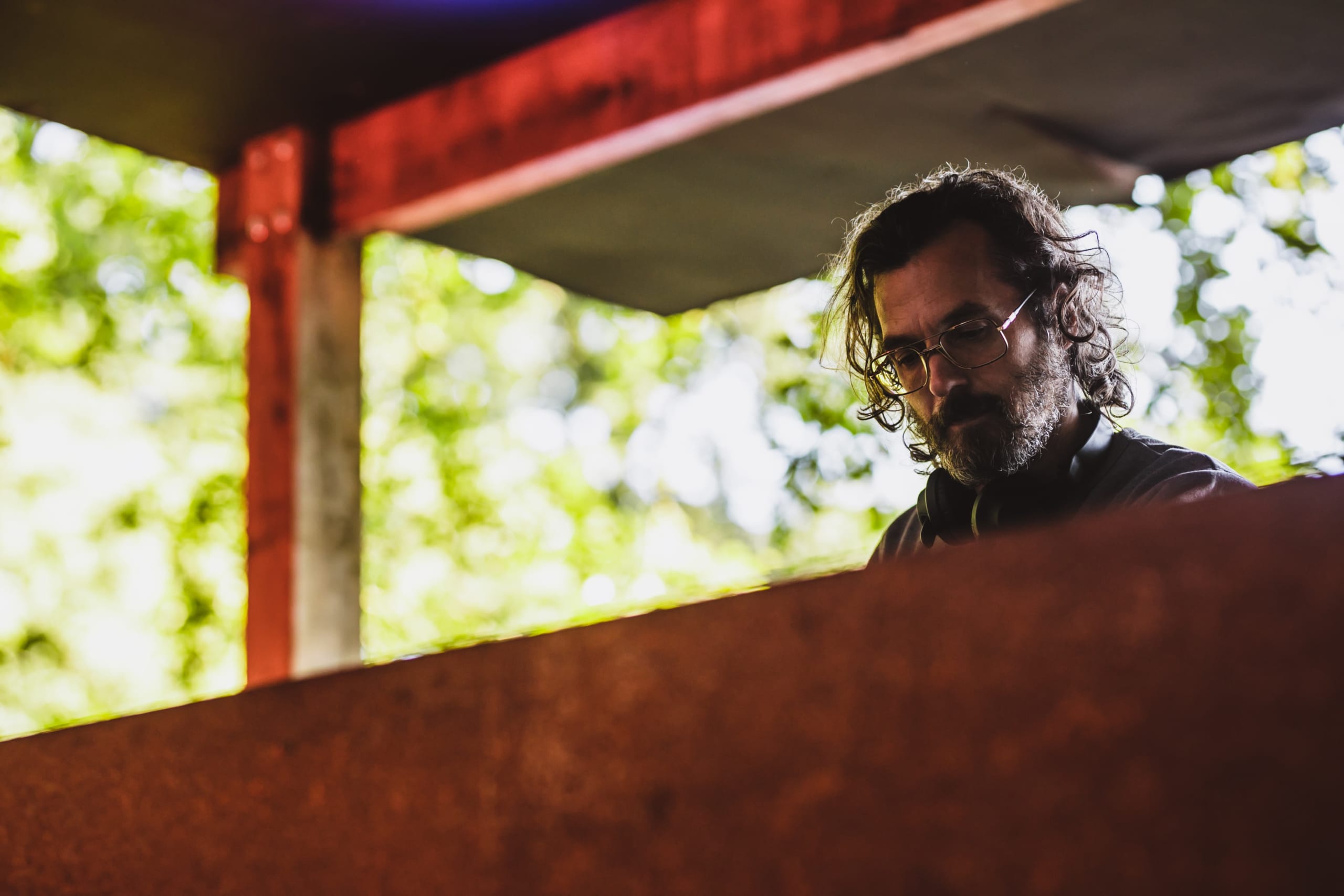 Most conversations about Felix Dickinson’s life as a DJ tend to get tangled among the rigs of the UK’s free party scene of the early-1990s. As a 20-year-old he was throwing raves and running from the police, under the tutelage of Brighton’s Tonka Sound System – the party collective that also provided a launchpad for DJ Harvey. Yet since those hazy, misremembered days, he’s gone on to become one of the most celebrated DJs in contemporary clubbing in his own right; a purveyor of boogie, disco and acid-licked house so distinct it could only come from his record collection. In recent years he’s been as talked about for his own productions, releasing irresistibly sticky grooves on the likes of Futureboogie and his own Cynic imprint, further cementing his reputation as a master of revelry. Now based in Bristol, we caught up with the storied selector ahead of an Asian tour, to talk set-ups, record shops and treading the digital-analogue faultline. 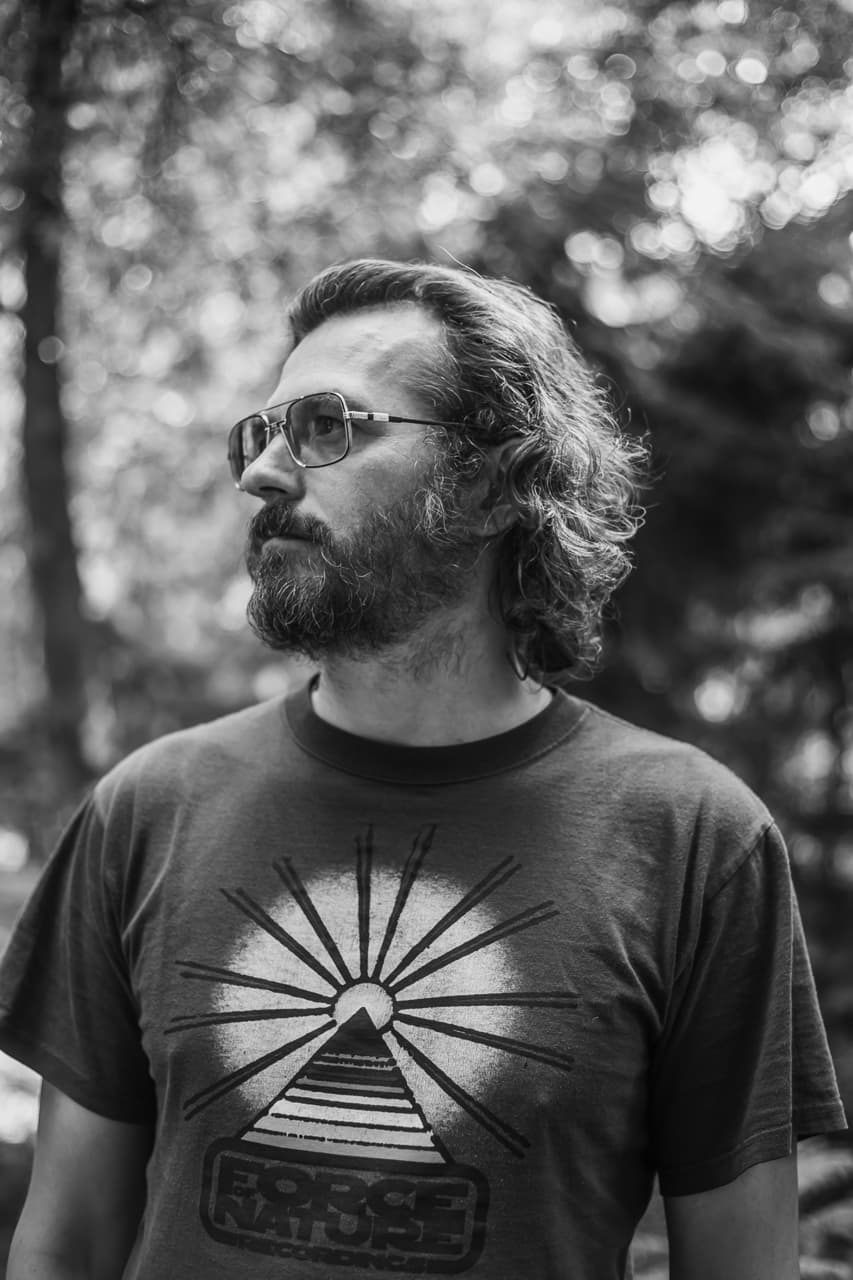 What does the word “analogue” mean to you?

In the early 90’s Irdial Discs had a spoof newspaper called ‘The Con’ that they included with some of their records which ran with the headline ‘Digital Debbie Minced My Manhood’ depicting a dot to dot nude image. The accompanying article claimed ‘….if the digital compression of EVERYTHING is allowed to run RAMPANT over our lives. You can say GOODBYE to the curves and juicy bits of the page three stunnas you’ve loved’. I’ve always loved that analogy, and it makes quite a good argument for the case of analogue over digital. Analogue sounds can capture those sexy round juicy sounds that you just can’t truly replicate with digital. 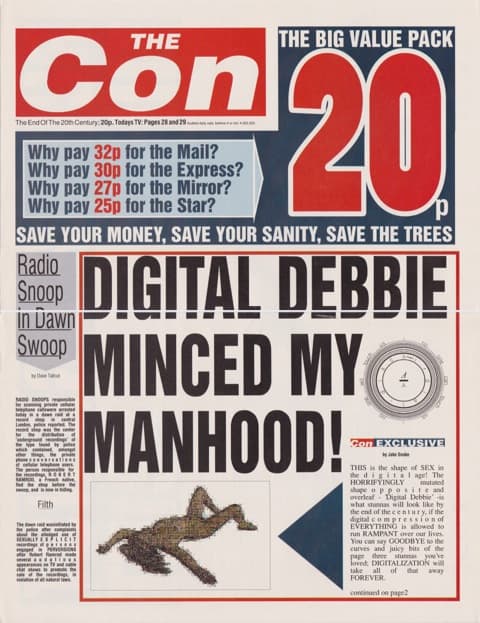 What’s your set up at home?

I have two listening rooms at home. One is my office, which is wall to wall, floor to ceiling of my 12’s. I have a pair of CDJ Nexus 2000’s and a pair of Technics 1200’s with Isonoe arms and Audio Technica cartridges, all plugged in to an Alpha 9000 mixer, a Quad 302 amp and a pair of Roth Oli speakers. (I used to have a pair of Mark Levinson Red Rose Spirits speakers in there, but I’m trying the Roth’s at the moment, I think the Mark Levinson’s were probably better, I just haven’t swapped them back yet.) Upstairs in my living room I keep my albums and more home listening as opposed to club records. The living room is still a bit of a work in progress as I’ve been getting my decks tweaked out.

Do you find much time to listen for pleasure?

What’s been your most exciting recent purchase?

Kit wise, I did a little consultancy for SSL last year as they were considering making a DJ mixer and wanted to hear from a few DJ’s what we thought, so I went down the factory where they make everything, it was too tempting being that close to all their amazing desks, and a year later I went to pick up one of their new Matrix consoles. I still haven’t got it all set up yet as its quite a big step from what I’m used to and needs a whole load of other kit to get it working properly, so am in the process of getting all the other bits together. Can’t wait to get it up and running.

What are you listening to the most at the moment?

Musically, I do a dub set at Love International each year which is really fun and gives me an excuse to play a lot of music that I love but don’t often get a chance to play, and the music I got together for this years set has been getting a lot of air time. 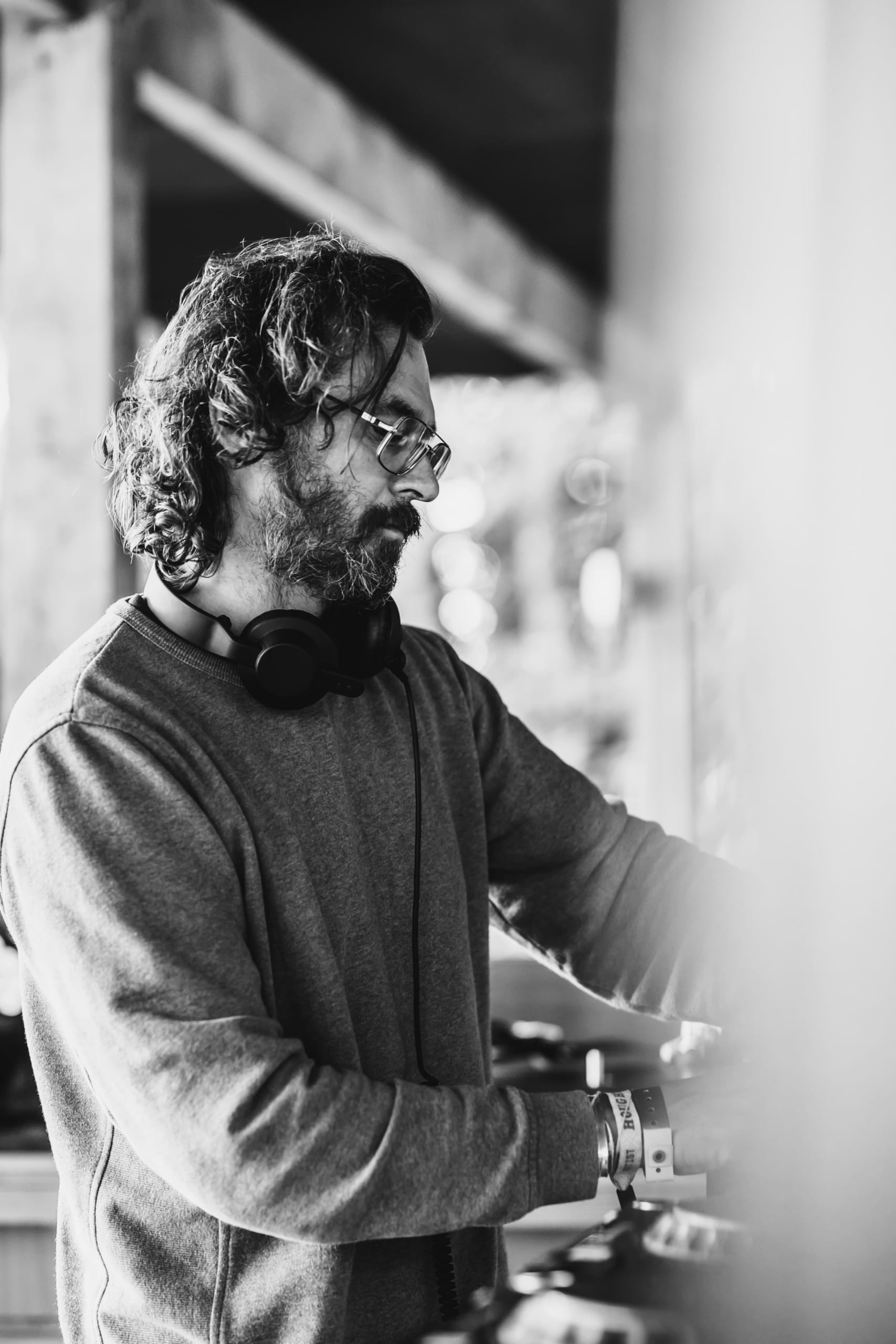 You’ve lived in Brighton, Bristol, Brixton – all parts of the UK with great record stores. Have you always been drawn towards them? Which are your favourites?

I’d have thought the obvious question there would be why am I drawn to places that start with the letters B R I, which I confess I don’t have an answer for! I probably went record shopping every day when I lived in Brighton, lots of good second hand shops and when my friend Tony Lee ran Jelly Jam and then Ugly Records there was always something coming in to check. I’m ashamed to admit I don’t dig much in Bristol. I know there are a few good stocked shops (Prime Cuts is probably my favourite), but I find it more fruitful going to London to get my new stuff as I know I can spend a whole day catching up on all the new releases, and it’s harder for shops in a city Bristol’s size to stock everything. The good record shops in Brixton left a bit before I did. I used to like going to All Tones (Alton Ellis’s shop on Coldharbour lane) before they put the rent up and crowded them out of the market. I think these days Phonica is probably my go to shop for the new stuff (and I try to stay on top of new releases as they come in on a daily basis checking Juno). Other than that I have a few dealers who I like to check, particular shout outs to Nick the Record at DJ Friendly, and then there are few international dealers and record shops I like to visit, but I’d rather keep their identity secret!

I read you had to switch from vinyl to USB when you moved house. Did it feel like breaking with a tradition of sorts?

I’ve got all my records out of storage now, but am totally sold on the convenience and reliability of playing off USB these days as there are too many variables that can mess with the sound if you turn up to a club wanting to play records (feedback, bad needles, skipping decks). To begin with it took a bit of time to rip enough records to fill my first USB, but now I’ve got myself in quite a good system of ripping anything as soon as I buy it. I used to buy records and maybe only listen to them when I was DJing, so it’s a good discipline to listen to them start to finish while I’m ripping and helps me get to know my tunes a bit better, plus I then have the added benefit of being able to listen to all my tunes when I’m on the move, which I would never have been able to do when I only played vinyl. My mantra now is “USB for the road and records for home”.

What has the influence of festivals been on DJing in your eyes? Do you have to compromise?

A lot of my early experience DJing was playing in fields at free parties so I’m pretty comfortable playing festivals. I suppose some DJ’s worry that if they are playing to a large festival crowd they may be tempted to play something a bit more accessible, but to be honest I think as long as you play good music that you like, there’s no compromise. 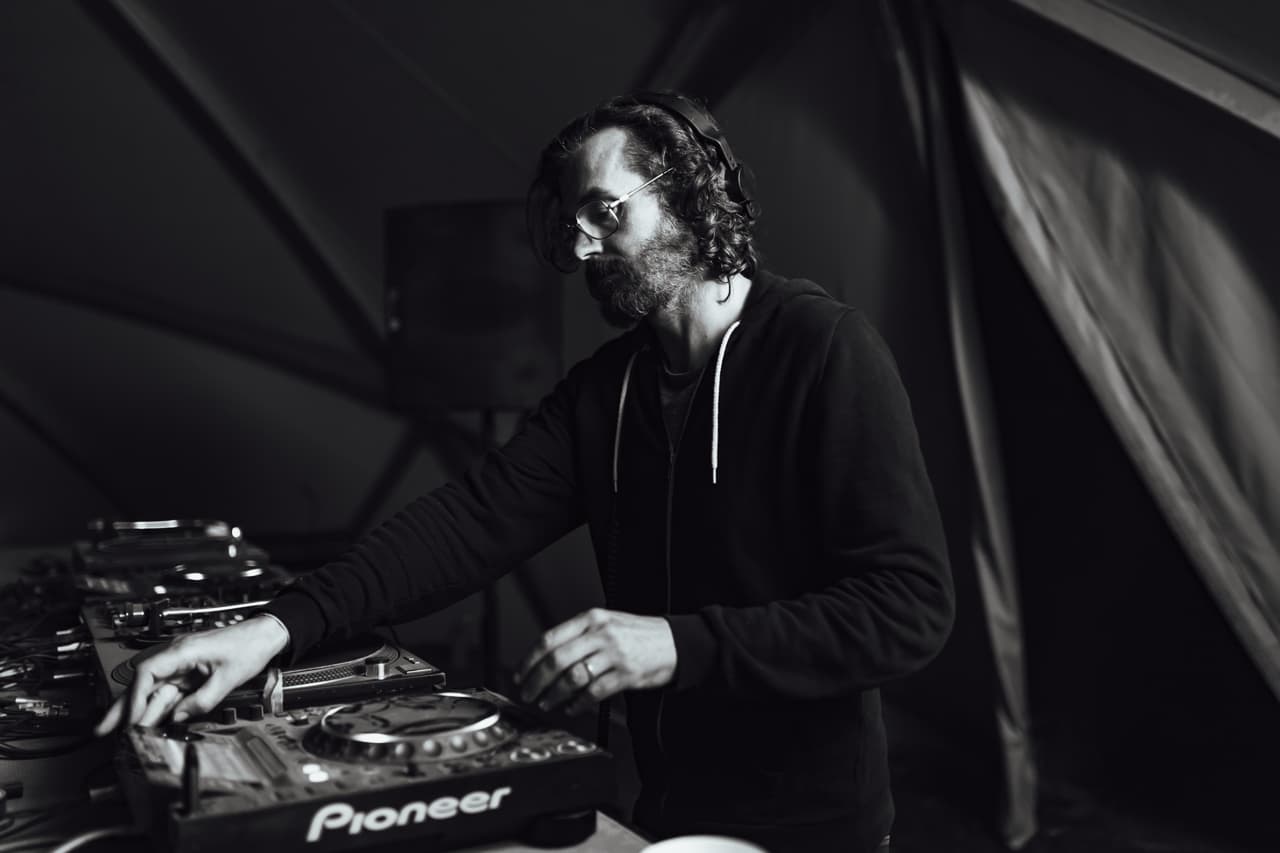 In terms of sampling older records, or editing them, what production qualities are you listening out for?

I’ll only edit something if I don’t feel happy playing the record in its original format, maybe the OG is too short, or has some sections that to my ears are a bit shit, or non-danceable, then I’ll try fix it.

What’s an old gem that still makes your jaw drop?

There’s a Jimmy Ruffin record I’ve been playing a bit recently that still makes the hairs on my arms stick up each time I play it. I managed to play it at sunrise at the Pavilion this year at Houghton.

What’s your routine when making music?

There’s no real routine for me really, it can be different for every track. Sometimes I might have a sample that inspires me and start with that and work around it, other times I might just go in the studio, get some drum machines or synths clocking away with each other and just bash away and see what comes out; see if the boxes can bring me inspiration (actually I really like that way of working, wait for some serendipity from the machines and see if I can develop that rather than try and “compose” something from inside my head).

As someone who partied through some defining moments in UK club culture, how do you feel about the history of club culture? Is looking back always healthy?

To paraphrase a well used quote, if you can remember any of the defining moments of UK club culture you probably weren’t getting involved enough! I’m happy to say my memories of a lot of my early days partying are patchy to say the least, and thankfully I’m really not one for looking back. It’s of course important to remember the roots of our culture, but one of the most universal elements of all of the greats was their desire to grasp modern technology and embrace new sounds. So I guess if there’s one thing we should learn from looking back, it’s to remind us that we should always be looking forward.

What’s next for you?

I’m in the middle of finalising an Asian tour for this December that I’m really looking forward to with a few countries I haven’t played in before. Studio wise it’s all been a bit on hold at the moment waiting to get the new desk properly set up, but I’ve got a track that I started earlier in the year with Quinn from Paranoid London and Futureboogie’s Christophe. It’s sounding pretty good, but can’t wait to try it out on the new set up and getting it finished.

Felix has been part of the UK’s underground dance scene for the last 3 decades, learning his trade DJing at free parties and illegal raves and co-founding his first record label Ugly Music in the 90’s. He’s produced records for well renowned record labels worldwide including DFA, Rush Hour, Eskimo, Golf Channel, Claremont 56, Futureboogie and his own label Cynic. Recently he’s been getting a lot more attention due to his high profile residencies for Block 9 at Glastonbury and Croatia’s Love International/Garden festival and has secured slots at well known clubs and festivals including Fabric, Panorama Bar, DC10 & Houghton Festival.