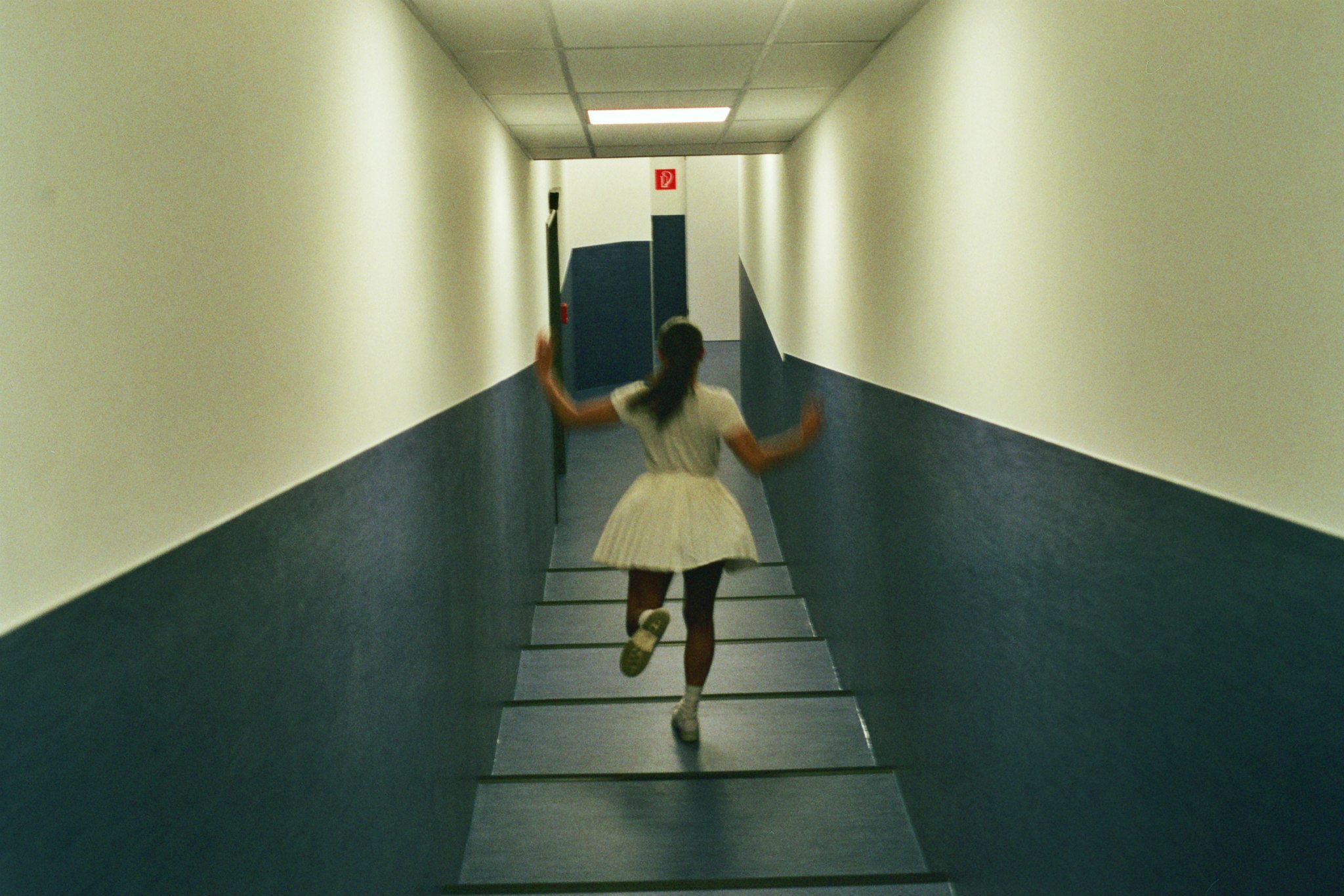 The course of Maryama Luccioni’s life has lead her ever further North. From a sun-kissed childhood in Corsica, to her teens and early twenties spent in bustling Paris, and for the past six years, settled in Berlin. But as she has traversed Europe, her taste has consistently gravitated to the African roots of her parents. Under the pseudonym of ‘MaryisonAcid’, she is one of a trio of residents, as well as co-founder of monthly Berlin party, African Acid is The Future. Here, joined by a cast of international guest selectors, as well as partners WolfonAcid and Dauwd, Luccioni takes this esoteric African pulse and applies it to records spanning post-punk, house, jazz and whatever else works. As she says so herself, “Africa is mother of beat, and beat is tempo.”
Collecting records comes as second nature to Luccioni, who has been digging internationally for many years, yet her heritage, attitude and willingness to share ensure she stands out in the community. She spoke to John Thorp about the ongoing evolution of African Acid, taking risks as a selector and the role of the resident DJ. 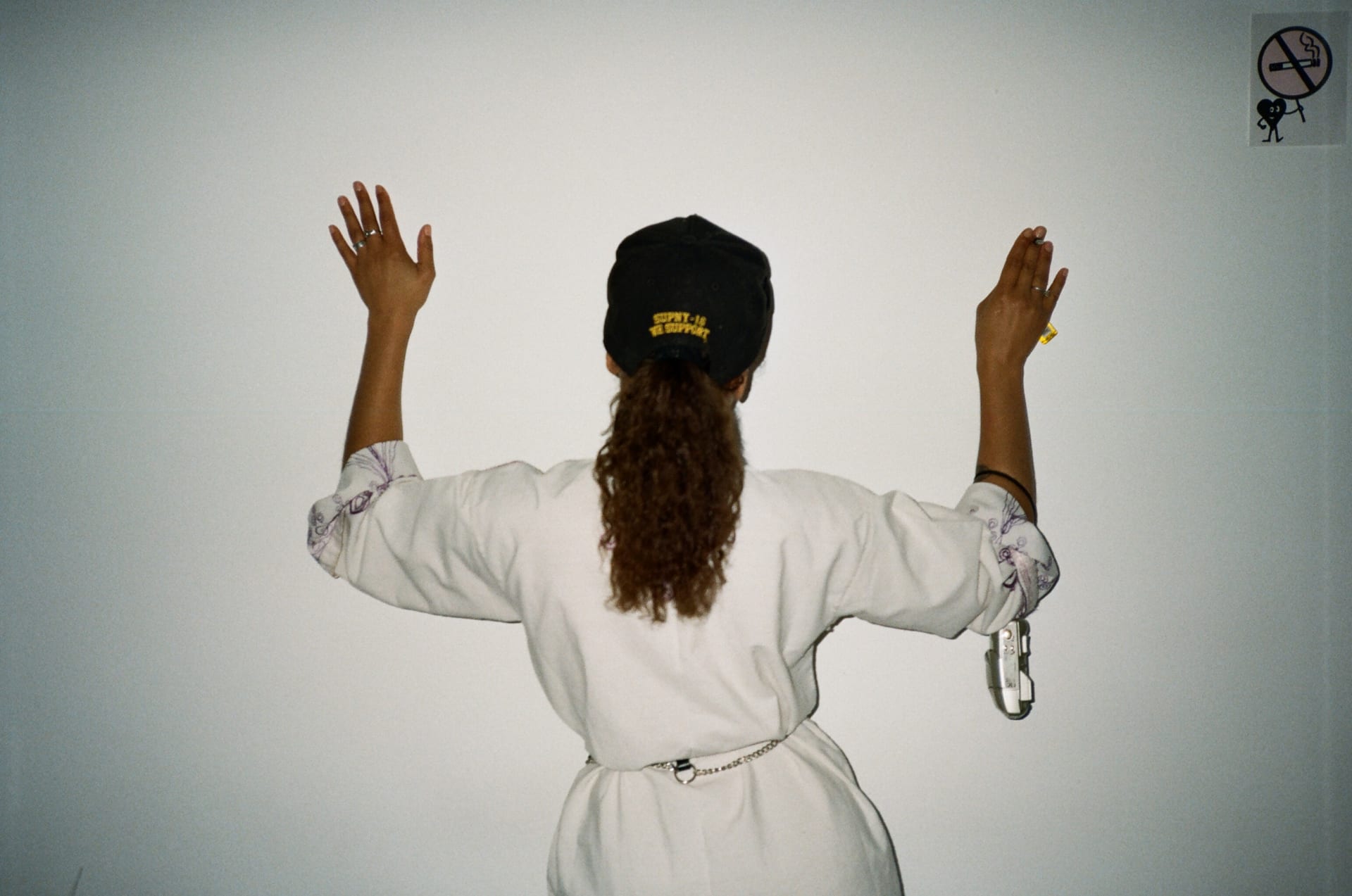 What does analogue mean to you?

When i think of analogue, the first thing that comes to my mind is texture and authenticity.
At our night for instance, we have a photograph who shots in analogue. Always discreetly, he manages to capture the essence of the night without disrupting it or modifying it. I think that the fact that he shots analogue holds the secret of the quality of the series.

What was the record collecting scene like in Corsica, where you grew up?

I didn’t know there was such a thing as record collecting scene as growing up there really. As a child i spent most of time taking ballet classes at the conservatory. My interest into collecting of any kind developed much later. There wasn’t a record shop with actual vinyl in my hometown, or at least that I knew of. Throughout my teens, i was then more curious, about vintage objects, books, garments and then records… I started hunting flea markets for bargain and collecting when I was around 15 or 16 years old. That is something that is still with me.

African Acid has been running for a number of years now, from a small punk bar, to your current monthly parties at Festaal in Kreuzberg. How has it evolved, and which new directions do you think it will develop?

Every change came very carefully, because we always felt like we were lucky to see the growth of our project. I remember when we started at Loftus Hall, some people would complain about the heat, the size of the room or other people who couldn’t make it in as the capacity was reached early. I could just say, this night is young and it is taking place where it should be… There is a time for everything and we knew that eventually. we would have to change that but in time, not after few months, and not because of an important interest at early stage. I think mostly, we wanted to keep the initial essence of our night intact no matter where we would bring it.
From the womb that was Herz Bar, where things began very spontaneously, but were also very clear in my mind, like a vision of how and with who to explore it, to our beloved first club residency in Loftus Hall to our current challenge which is Festsaal, it always remains a matter of perspectives and how to make the most of one venue. I wouldn’t say we changed anything from the initial formula. We adapted our possibilities to the growth of the party while doing our best to preserve the atmosphere that i think our crowd care for so much.
For example, having live bands within our parties, and not just as a first part, but completely as part of the night is one of the goal for us that is very crucial to achieve, due to the nature of our musical direction. With Festsaal now, it’s so interesting, as it’s not a classic club configuration, instead, it asks to stay in touch with your imagination to build what will come next , and I think that after a few editions now, we’re feeling at home again. My partner, Romain Azzaro, is doing an amazing job with the sound in the room, in collaboration with Lambda Labs. The party is in constant motion to us.

Where are your favourite spots to dig for records, both in Berlin and further afield?

In Berlin, I dig in the usual listed shops such as Oye, Hardwax or the small antena of Phonica at The Store sometimes, but any small record shop i come across deserves a visit. To be fair, there is much more i found via internet for what i am digging than in physical shops here.
It’s a shame, as I do enjoy flicking through, have a good look at the artwork, feeling a record at first and the moment of relaxation or frustration that come with going to a shop… I tend to go to Superfly records in Paris for instance, but digging is spontaneous to me. If I travel, I just ask the locals and go. 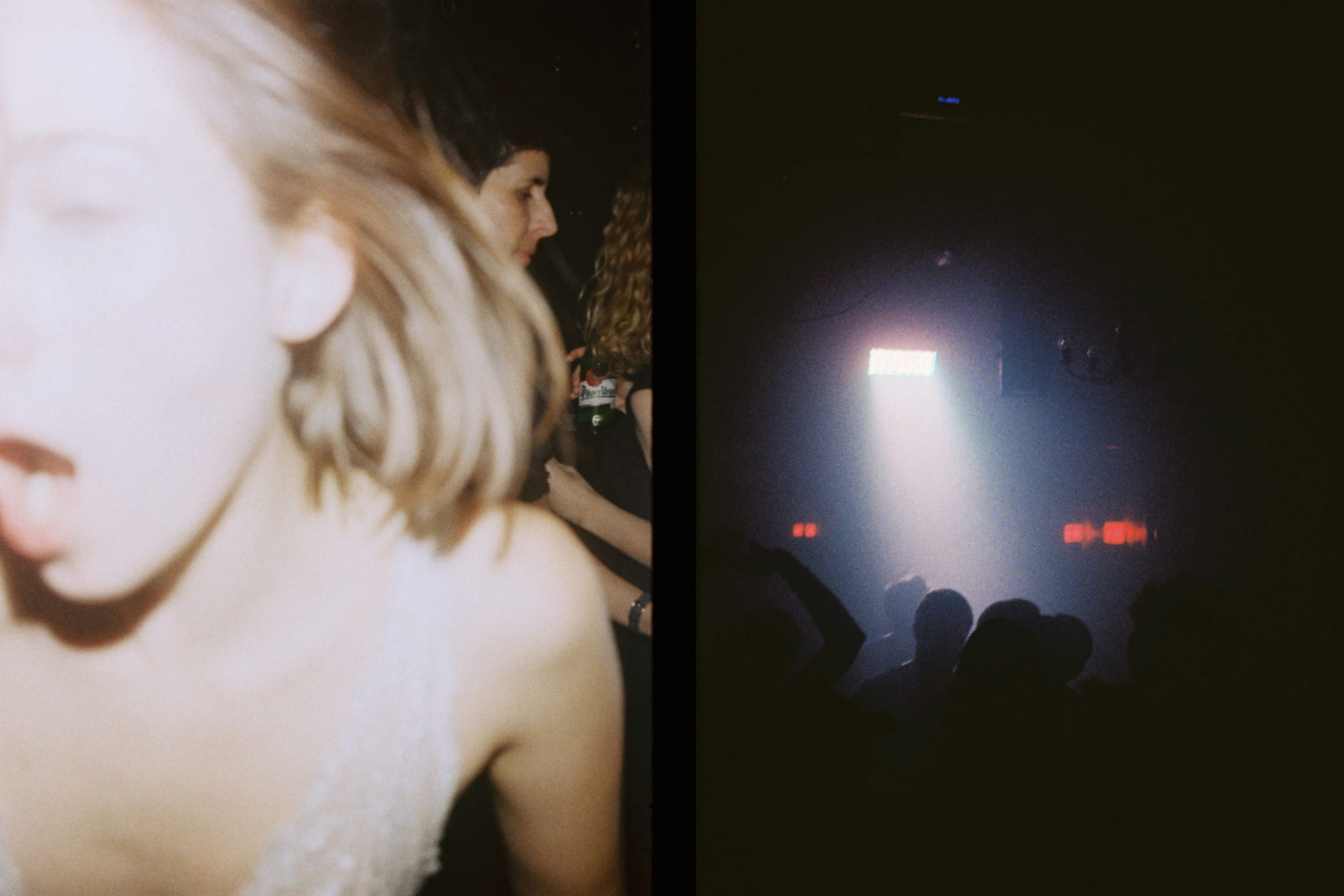 African Acid is also markedly different each month, depending on the approach of the DJ. Would you say you see your job as a resident DJ as ‘joining the dots’, as they say?

Yes absolutely, i think as residents we hold the harmony and give an invisible structure to the night and what our guests will propose. We have also defined the African Acid Is The Future signature sound, and people who follow us since the beginning are in touch with this. I can feel them in the room. So it’s all about getting the right balance, between you and the guests and to know when to actually vanish from or reappear in the booth.

You seem to have developed a genuinely open minded crowd at African Acid, but sometimes records still take a while to make sense to people. Will you continue to play something you believe in even if it doesn’t necessarily get a huge reaction straight away?

To be fair, as you said, our crowd seems to be genuinely ready for something they don’t instantly understand. It doesn’t cease to amaze me as to what they go for, and to be honest at some point, I really don’t think anymore, otherwise I lose my groove… I won’t force a record, but sometimes a record gets a more difficult introduction. But that doesn’t mean that it won’t develop to become satisfying to the crowd.

What does the future of the party look like to you? How do you keep it fresh?

As I was saying earlier, the party is like a movement to me. It gave me the luck to feel part of a generation and have things to look forward to, both within the city I live, and other parts of the world. The programming holds the most important part for us, so for instance getting to invite artists that will pursue the music laboratory that it has became. The future looks like more of what we already do, with room for live surprises. We just changed venue to Festaal in September so that keeps us real fresh, plus it takes few shots to get it as harmonious as it could be.
We are looking forward the spring season to enjoy the lovely garden that the venue offers. Otherwise to keep fresh, we take a break, and go dive in the sea, which doesn’t seem to happen soon enough! Otherwise, there are things on the way that we can’t wait to share with everyone and we will in a near future. 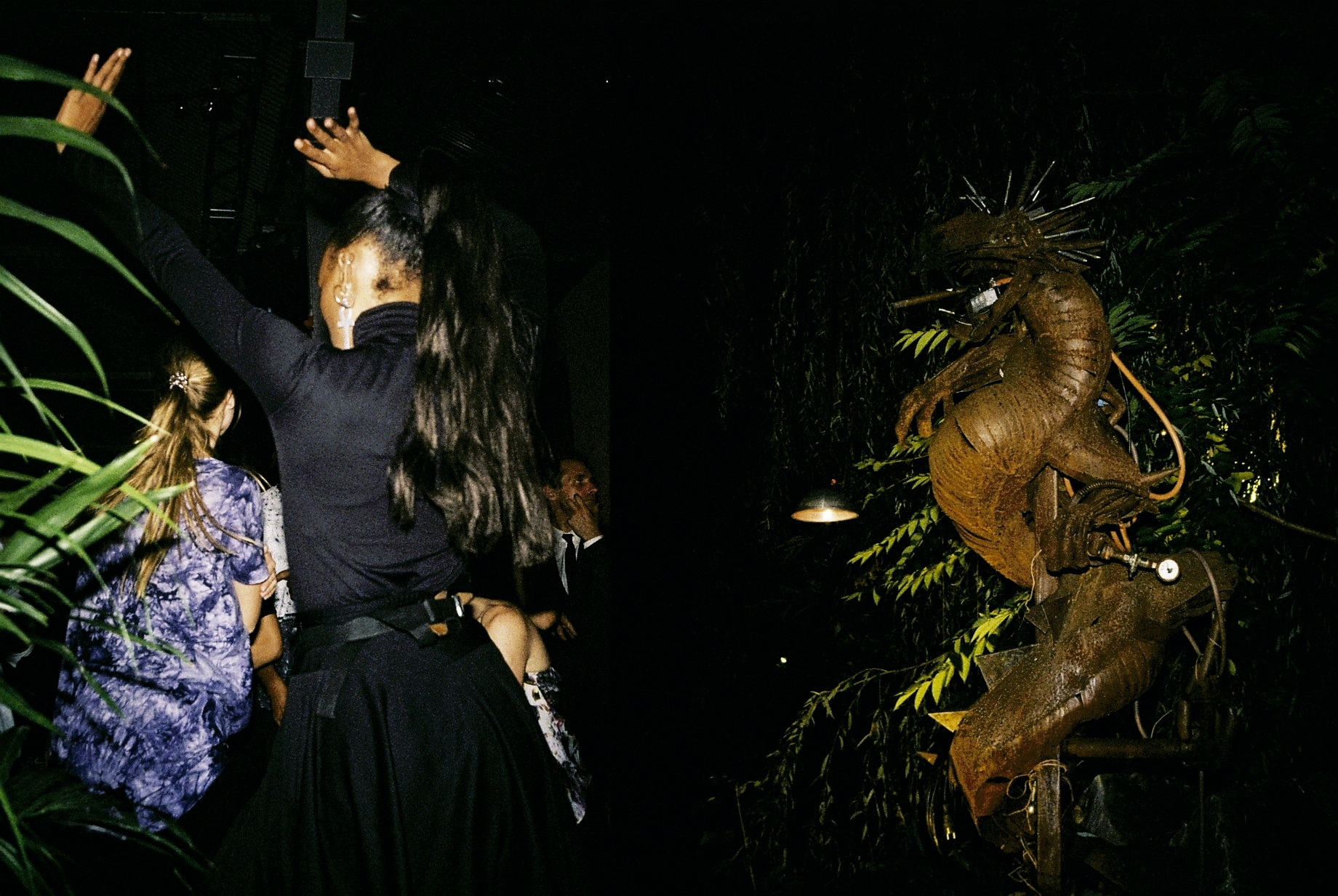 African Acid is a unique party in that it offers something somewhat different every month. It always feels like the same party, with regulars, greenery and fruit! But the tempo and style alters based on the guests involved. Does this prove a challenge for you too, in order to keep it fresh each month?

It is a challenge but mostly logistically. To be able to fill up your calendar the right way find the right balance, the energy and see which story goes better after the other…Dauwd who is part of our team is pretty good at suggesting things at the right time. It is a very tedious task, not everything comes as you would like to plan of course. But it so satisfying when it works out. So far we been pretty lucky with it, and even managed to host Amadou & Mariam for a private showcase last year. But yes, we do think, “OK, this month should be more cosmic or tribal or psychedelic or electronic.” Even if our night is all about eclecticism, there is a slight theme that changes every edition. 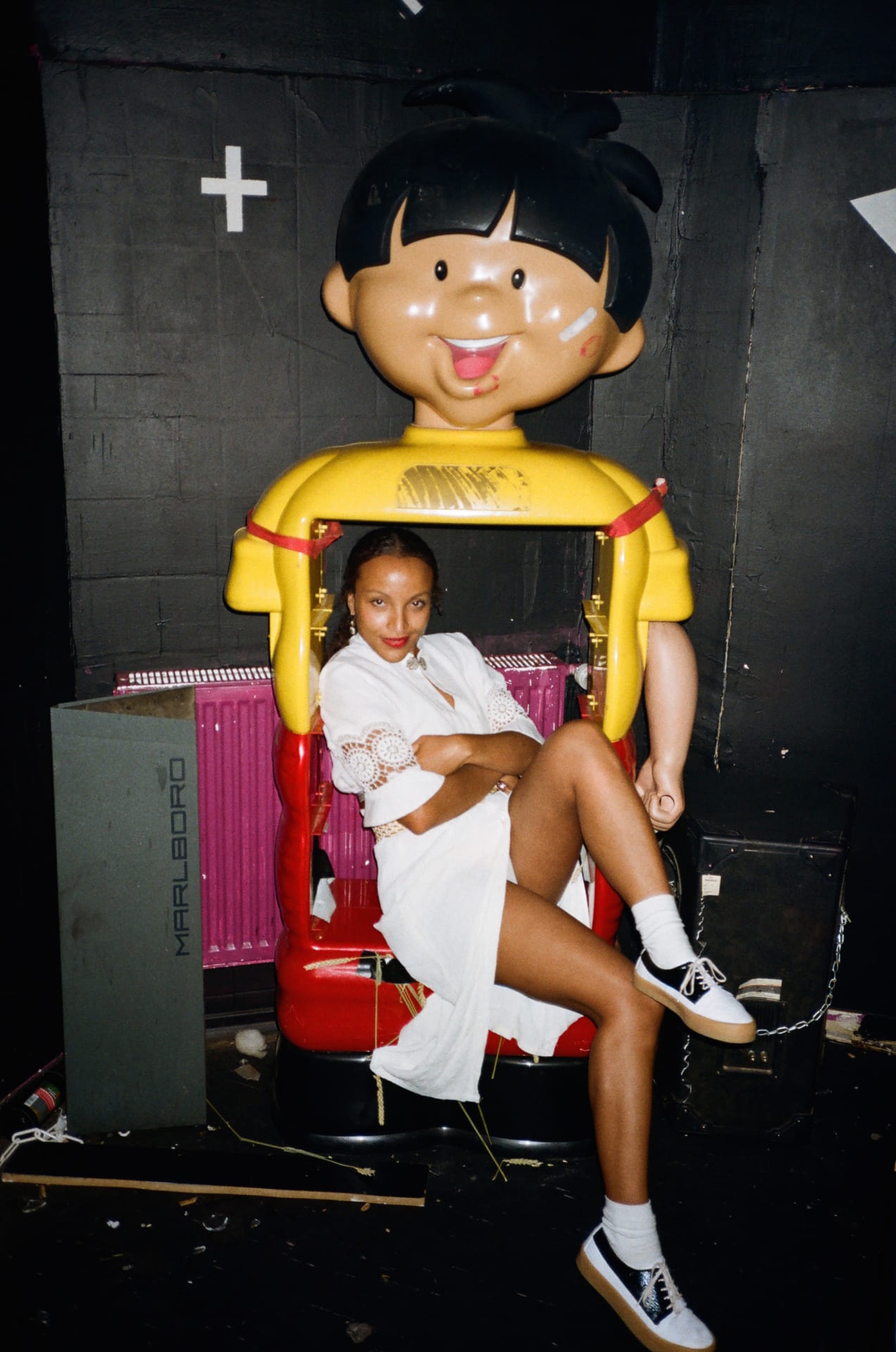 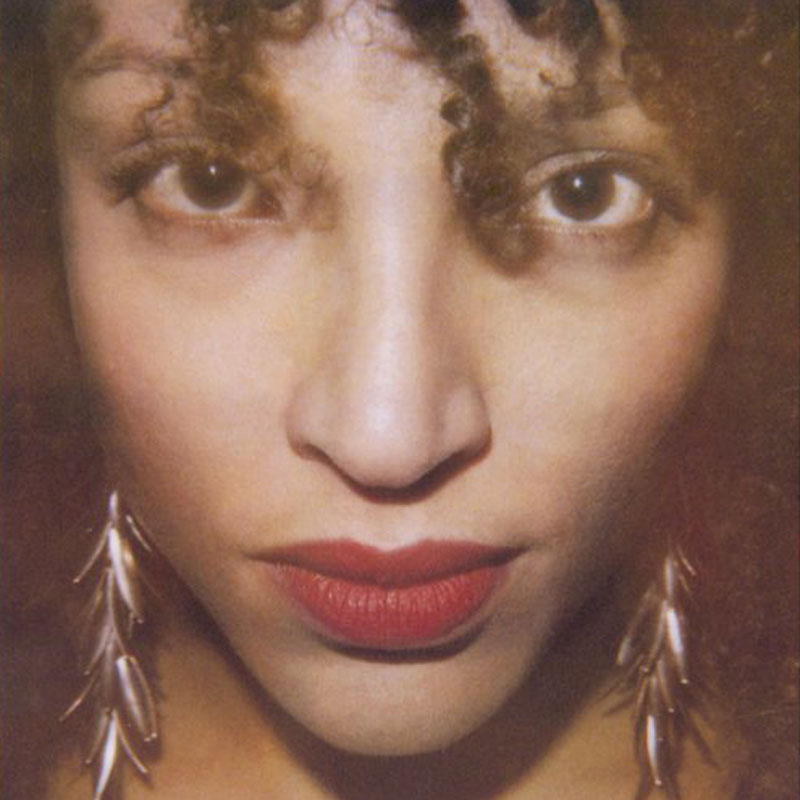 The woman behind cult Berlin club night African Acid Is The Future. Maryama describes AAITF as “From afro to techno and a lot more in between …Because Africa is mother of beat and beat is tempo. May your hearts beat on our tempo and steps groove with our flow. On a acid trip around afro rhythms, travelling from Nigeria, Ethiopia Congo, cruising over electronic sounds, cosmic and psychedelic vibrations.”